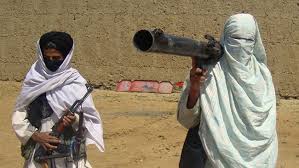 The deadly Pakistan-based Islamist group Tehreek-e-Taliban (TTP) has become deadlier. If its claims that it has developed an indigenous missile named Omar-1 which it successfully test-fired are true then it poses a grave threat not only to Pakistan and Afghanistan but to the regional and international security as well.

Terrorism has acquired new dimensions and threatens to alter the status of the world order. The scenario is very scary. The new firepower will not only help grow the influence of the fundamentalist Islamic forces, it will also endanger the actors who created them.

And Pakistan will be the first to face the heat as its security forces have stepped up operations against the Taliban following a dastardly attack on a Peshawar school in which 145 people lost their lives, including 132 school children. And the Taliban has made its intentions clear by stating that its enemies will be on the run. From now onwards, the Taliban will not only be able to inflict maximum pain on its adversaries, it can widen its operations as the missile can easily be assembled and dissembled in accordance to the situation.

What we are witnessing today is a new version of terrorism. The movement is acquiring a very deadly shape after it has drawn in its fold several highly qualified technocrats, who are religiously motivated, indoctrinated and bent on establishing an Islamist state. Technology, it is now apparent,  is their latest weapon of the Taliban. With terror as their chosen instrument, these radical Islamists seek to remake the world.

The more worrisome trend is the links between some retired Pakistani military and intelligence officials and nuclear scientists to Taliban and al-Qaeda militants. Without their help, it would not have been possible for the fundamentalists to acquire the technology to develop a missile.

The latest development will give Western leaders nightmares about militants acquiring nuclear materials, or worse, an entire weapon. When the militants can develop a missile, can that be far behind? It certainly will be next on the agenda of militants. And god forbids if that happens, the entire mankind will be endangered. The consequences of the cocktail of terrorism and nuclear weapons can be very devastating.

If militants have gained strength today, then Pakistan can not absolve its responsibility. It has allowed the militants to grow, giving them not only shelter but finances. Pakistan has long been suspected of playing a double game, fighting some militants while supporting those its generals have regarded as strategic assets to be used against rivals and neighbours, India and Afghanistan.

Not only that, Pakistan has notoriously played a vital role in nuclear proliferation. One cannot forget the enormity of what Pakistani nuclear scientist A. Q. Khan has done. He created an elaborate, wholly illicit network by selling nuclear secrets to Iran, North Korea and Libya. Was he doing it alone? Looks unlikely!

The Pakistani establishment and the military in particular were completely complicit as Khan widened his nuclear black market.  The fear of nuclear terrorism in Pakistan stemming from the danger of radical Islamists overrunning the country and gaining control of the country’s nuclear assets is arguably the greatest threat. The possibility of Pakistan’s nuclear weapons falling into the wrong hands looks more real now than ever. And the world can’t turn its eyes off.

There can be no second view about the fact that TTP is now a force to reckon with. Over the last few years and especially since the Nawaz Sharif’s PML (N) has come to power, the government of Pakistan has been floundering in its policy to tackle the challenge posed by this militant organisation. The government cannot be faulted for efforts to engage the TTP in talks as was spelled out in its election manifesto; it bent backwards in its efforts and managed a few rounds of dialogue. The TTP, however, arrogantly perceived this effort as a sign of weakness and has adopted unreasonable postures. Most distressing has been its policy of continuing with its violent activities even as the talks are underway.

Time has come for Pakistan to act and act decisively. It will have to shun its approach of differentiating between good militants and bad militants. The United States has often reminded Pakistan to fight militant groups that threaten Afghan, Indian and U.S. interests. It is high time that pressure is built on Pakistan to target all militant groups to bring security to the region. Pakistan should also realize that a lot of its own citizens have died as a result of terrorism. A lot of members of their military have fallen dead.

While the people of Pakistan talk in hushed tones against the TTP, an all out popular upsurge is not being witnessed. No violent movement can be quelled unless the people do not provide unrelenting support to the military and political initiative. Terrorism can be contained by the security forces only with unrelenting support of the local population. The people in Pakistan are presently on the fence-sitters phase, they want the Taliban out of their lives but are dependent upon the government and the security forces to do the dirty job, they are not coming forward to make a contribution. Not much can be achieved without such support coming by.

It’s important for Pakistan to recognize that threat and to act against that threat. Not only Pakistan, it is also the responsibility of the international community to ensure that these militant groups do not gain a foothold but are pushed back into the recesses of memory. The world can’t afford to remain a silent spectator now. The top priority should be to ensure that Pakistan’s nuclear weapons and technology do not fall into the hands of terrorists.