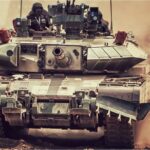 Jaibans Singh On 14 April 1938, a Cavalry Regiment of the British Indian Army named the Scinde Horse, led by its Commandant, Colonel Malcomson, went on parade at Rawalpindi on their horses. This was the last mounted parade of the regiment as it had been selected to be the first cavalry unit to be "mechanised." The regiment shed its horses and was equipped with armoured … END_OF_DOCUMENT_TOKEN_TO_BE_REPLACED