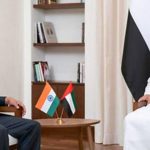 Onkareshwar Pandey Pakistan has made a strong pitch for "resolution of issues" with India. The diplomatic rhetoric commenced in early March, a little after re-commitment by the Director Generals of Military Operations (DGsMO) of the two countries to uphold the ceasefire agreement and protocols of 2003. This initiative was followed by a number of  other actions that indicated … END_OF_DOCUMENT_TOKEN_TO_BE_REPLACED