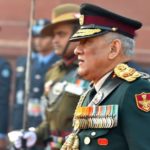 Lt General Satish Dua The government of India has recently issued a notification regarding appointment of Chief of Defence Staff (CDS). According to this notification, the CDS may be appointed from among serving as well as retired three or four star rank officers from all three services — Army, Navy and Air Force — subject to their being less than 62 years of age. This … END_OF_DOCUMENT_TOKEN_TO_BE_REPLACED