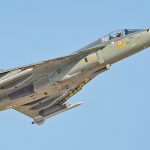 Col. (Veteran) Alok Mathur On   04  February,  2001,   the first  prototype  of  the indigenous Light Combat Aircraft (LCA)  took off from Yalahanka  Airbase  for its maiden flight  and returned  safely  in the presence of then Prime Minister of India, Shri Atal  Bihari Vajpayee. The prime minister named the fighter aircraft “Tejas” which means radiance in Sanskrit.  He … END_OF_DOCUMENT_TOKEN_TO_BE_REPLACED