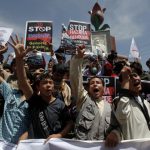 S Ranjan Baluchistan, the most restive province of Pakistan, has entered into a new era of violence. The pattern of violence has witnessed a change of late with the new trend being based more on religious polarisation than nationalist ideology as was the case earlier. This is quite evident from the ongoing massacre of Shia’s in Baluchistan and Khyber Pakhtunkhwa. The end … END_OF_DOCUMENT_TOKEN_TO_BE_REPLACED