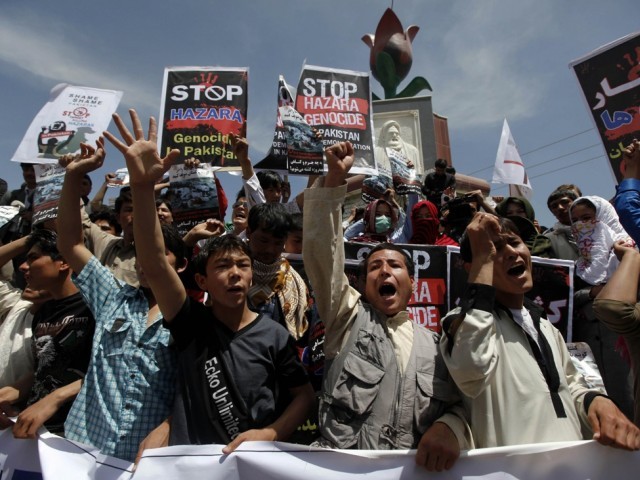 Baluchistan, the most restive province of Pakistan, has entered into a new era of violence. The pattern of violence has witnessed a change of late with the new trend being based more on religious polarisation than nationalist ideology as was the case earlier. This is quite evident from the ongoing massacre of Shia’s in Baluchistan and Khyber Pakhtunkhwa. The end result is that the onus of unrest in Baluchistan is now being put on sectarian violence while the armed struggle for freedom that has been going on for many decades now has been sidelined. The struggle did not have a religious signature all through; it is quite surprising that it has now taken the form of pogroms against minority communities.

The Shia’s and Hazara’s of Baluchistan have, in the past, never faced any violence from the Sunni Baloch; the communities have for ages coexisted in a civilized and secular manner; both Shia and Sunni of the region have always looked upon themselves as Baloch first and foremost. Whatever violence was perpetrated against the Shia’s was the handiwork of the Pushto population or Punjabis while the Baloch remained focused only towards their goal of achieving a separate nation.

A slightly deeper analysis leads to a realisation that the emerging trends have the distinct signature of Pakistan’s infamous Inter services Intelligence (ISI). It becomes quite evident that the Pakistan army has decided to use the Sunni Baloch against the Shia Baloch and the Hazara. The population dynamics in Baluchistan are such that the Shia’s, both Baloch and Hazara, do not form majority and by polarising Sunni Baloch from these minority entities the struggle for Baloch nationalism is automatically weakened.

How has this come by? The Pakistani establishment has, for quite some time now, been funding Madarsas to teach militant Sunni Islam to the Sunni Baloch children. These children have now reached an age where they can hold the gun and assume leadership. It is this radicalised, indoctrinated and ill informed segment of the Baloch society which is on the pay roll of the ISI and is doing the dirty work for the organisation. Thus, a certain degree of legitimacy is being provided to what is, in actuality, a totally motivated and stage managed divide of the community.

Mass killing is being supplemented by selective targeting of the white collared society by militant organizations. Zulfiqar Naqvi, a judge in Quetta was murdered along with his two aides on 30th August. He was a Shia sitting judge murdered by the Lashkar-e-Jhanghvi (LeJ), a sectarian Sunni organization which holds and propagates the belief that Shia’s are not Muslim and they need to either convert to Sunni or leave Pakistan. These new mercenaries of death did not stop with killing of the judge, they had the audacity to kill a senior police officer named, Jamil Ahmed Kakar, a Superintendent of Police (Investigation branch), who was reportedly playing an important role in investigation of LeJ activities and leadership. The LeJ, through an audacious press statement went on to threaten even the chief justice of Pakistan, “Any judge who sentences our arrested activists will meet the fate of Naqvi. The chief justice and all other judges will be on our hit-list if they harden their attitude toward our activists whose cases are currently pending in the courts. We do not only issue warnings but also do what we warn to do,” reads the statement of the organisation. Nobody in Pakistan can go this far without protection from the ISI.

With the conflict having turned inwards the Pakistan government and more importantly the Pakistan army is saying that the violence in Baluchistan has nothing to do with nationalism born out of alienation but is sectarian in nature. The situation further provides to the Pakistan authorities a reason to go hammer and tong against the entire Baloch population. The evil drama is being played out to send a political statement which tarnishes the image of the Baloch national aspirations.

It is well established that the ISI has played and continues to play the religious card in India (Jammu and Kashmir), Bangladesh and Afghanistan. Now it is trying the same trick in Baluchistan also. The main target a few years back was Hazara -Shia and slowly it has become Shia and now a secular society is witnessing unprecedented sectarian violence. The game which is being played in Balochistan is very similar to the one which was played in Bangladesh. The Pakistan army in the years before the 1971 war created Jammat-e- Islami (JeI), a cadre said to be fighting for the Bangle nationalists but instead was being used to aggravate sectarian violence in the region. The JeI, instead of solving the issue aggravated separatism to such an extent that there was no common point left where the Bangla nationalists could work out a solution.

The committed cadre of the Baloch nationalists has been ignoring LeJ and the other bands of mercenary religious bigots because they do not want a Baloch vs Baloch fight, where Sunni secular Baloch will end up fighting Sunni-extremist Baloch. It’s a tough situation but one which is known to those who are focused to their objective of wresting a separate nation from the oppressive bondage of Punjabi chauvinism.

This new trend in violence represents the failure of Pakistan as a nation even as it highlights the proclivity of the State to exploit religion to quell legitimate demands for separatism. The Pakistan army has not learnt any lesson and is destroying the country by double crossing its own people in a self defeating manner that will ultimately lead to the disintegration of the country akin to what happened in East Pakistan. In the meantime, the world must rise to the occasion and take cognisance of the plight of the Baloch people. They cannot be left to the mercy of the Pakistan army.