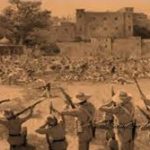 Jaibans Singh  “I fired and continued to fire until the crowd dispersed, I consider this is the least amount of firing which would produce the necessary moral and widespread effect it was my duty to produce if I was to justify my action.......It was no longer a question of merely dispersing the crowd, but one of producing a sufficient moral effect from a military point … END_OF_DOCUMENT_TOKEN_TO_BE_REPLACED