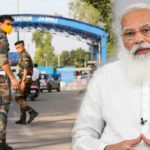 Jasbir Sarai The Jammu airport located at Satwari was attacked by Drones on night 26/27 July. There were two blasts around 2 AM at the IAF premises co-located with the airport. The blasts occurred at the area where a Helicopter Squadron of the Indian Air force is located. No equipment was harmed even as some buildings were damaged and two Air Force personnel on duty … END_OF_DOCUMENT_TOKEN_TO_BE_REPLACED