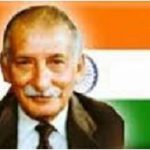 Simrit Kahlon The Indian system of honours, broadly speaking, comprises of two kinds of awards - gallantry awards and civilian honours. The gallantry awards may further be classified into awards earned due to acts of bravery during war and awards earned through acts of bravery in times of peace. Civilian awards also fall in two categories; those that come under the ambit of … END_OF_DOCUMENT_TOKEN_TO_BE_REPLACED