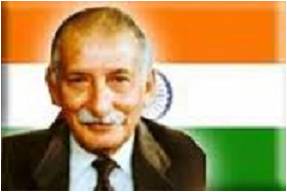 The Indian system of honours, broadly speaking, comprises of two kinds of awards – gallantry awards and civilian honours. The gallantry awards may further be classified into awards earned due to acts of bravery during war and awards earned through acts of bravery in times of peace. Civilian awards also fall in two categories; those that come under the ambit of sports awards and those that are given in recognition of commendable contribution in any field of human endeavour.

The Bharat Ratna is, of course, in a class of its own, it is the highest and most prestigious honour that is bestowed by the State of India upon any individual. The Bharat Ratna is awarded in recognition of exceptional service or performance of the highest order in any field of human endeavour. Literally translated, Bharat Ratna awardees may be regarded as jewels or gems of the country. Till date only forty one distinguished personages have been awarded the Bharat Ratna by the President of India; these include two persons of foreign origin who have a firm imprint upon India.

The first to receive this award was the eminent scientist Professor C.V. Raman in 1954 and the most recent to be decorated with this prestigious award was Pandit Bhimsen Joshi in the year 2008 after which the award has not been conferred. Understandably, speculation is rife regarding who will be the next to be given this privilege. Names that are being circulated include the “Master Blaster” Sachin Tendulkar, the doyen of Indian Hockey, Dhyan Chand and the first Indian lady President, Pratibha Patil, with Sachin Tendulkar being a front runner in most popularity polls.

What is the criterion for choosing a possible candidate for the Bharat Ratna? More than half of all those awarded to date have been freedom fighters or have held some sort of public office through which they have, no doubt, rendered commendable service to the nation. Public service it would seem is a prime qualification for earning this honour; that being the case, politicians or other popular leaders automatically gain precedence over others. Unfortunately, at the moment there seems no visible leader with mass appeal whose candidature for the award may be justifiable.

On the other hand, if one were to go scouting for actual jewels within the Indian system and try and identify some that are germane to the very being and personality of the country, a very obvious course would be to look in the direction of the Indian Army. If individuals who have fought for and contributed towards gaining freedom for the country have been found to be worthy of being the recipients of this prestigious honour, then the Indian Army as the single organisation that has contributed most seminally to the preservation of the integrity of the nation’s borders and peace and harmony within these borders is no doubt eminently suited for being bestowed this singular honour.

Every time that the country gives out a distress call, be it

an external threat, an internal crisis or a natural calamity, it is always the army that is called out to meet the exigency and restore normalcy. It is also true that, so far, the army has never failed the nation.

The Indian Army is perhaps the most blemish-free organisation that our country can boast of. While most democracies in their infancy have had to face and suffer the scourge of military coups and subsequently military regimes, the Indian Army has produced icons that had the ability to inspire and motivate generation upon generation of young men and women on the path of duty, integrity and above all nationalism. The army has been the strongest bastion for democracy, so close to the heart of the Indian citizen of today.

Is there one amongst the political leaders of today who can, for instance, match up to the stature and aura of a soldier such as Field Marshal SHFJ (Sam) Manekshaw? This man is a national icon produced by the Indian Army; a highly decorated soldier who led from the front and exhibited a legendary ability to inspire his men both on and off the field. He then went on to make a sterling contribution to the all important arena of Nation building. For long there has been a popular demand for this honour to be bestowed upon Sam Mankeshaw but the Indian government chooses to brush the same under the carpet

Sam is not the only one; Field Marshal K.M. Cariappa, Air Marshal Arjun Singh both served the country well and truly much beyond the call of duty, General KV Krishna Rao and General SK Sinha donned the mantle of Governors of states like Assam and Jammu and Kashmir at a time when these were burning and no one else was ready to take on the challenge to preserve the honour of the country. Many others beside them all have the potential to inspire volumes of the written word in their praise.

India today is a young country with almost sixty per cent of its population falling in the age group of what is known as the youth. If there is anything that the youth of today need most it is role models that can inspire them and keep their faith alive at a time when almost the whole system is leaning towards cynicism. What better way to provide them with such role models than to honour and acknowledge the lives of such real legends as we buy generic viagra have in the Indian Army? Finally, it is worth a thought that if people can be awarded Bharat Ratnas for having movingly sung paeans in honour of the sacrifices of our heroes in the armed forces why should the heroes themselves be denied this honour? Are we not being hypocritical when we do this?