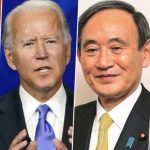 Hardip Bedi On 26 December, 2004, a Tsunami in the Indian Ocean region caused unprecedented devastation and a humanitarian crisis. Hundreds of thousands were killed and millions displaced. Major democracies to include  India, Japan, Australia and the United States got together to put up a concerted response to the crisis. The cooperation was given the name "QUAD" and was … END_OF_DOCUMENT_TOKEN_TO_BE_REPLACED