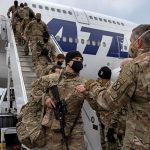 K N Pandita The Istanbul Summit called under the aegis of the United Nations for 24 April to carry forward the peace process in war-torn Afghanistan was postponed. The Taliban had declined to participate unless the foreign forces completely left Afghanistan. The Doha agreement between the Americans and the Taliban provided no guarantee of peace in a scenario of inter – Afghan … END_OF_DOCUMENT_TOKEN_TO_BE_REPLACED