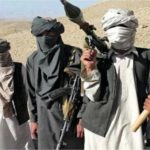 Jaibans Singh A few days back, two gunmen on a motorcycle opened fire on a police checkpoint in Islamabad, the capital city of Pakistan. In the ensuing fire-fight, an officer was killed, while two policemen sustained injuries; one of those injured succumbed to his wounds later. The assailants were also killed, however, no identification was found on them which points … END_OF_DOCUMENT_TOKEN_TO_BE_REPLACED