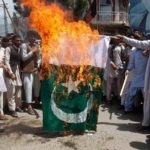 Jaibans Singh On 22 February 1994, a unanimous resolution was passed by the Indian Parliament, wherein, it was stated that the only outstanding issue between India and Pakistan, so far as Jammu and Kashmir is concerned, is retrieval of such territories that are under illegal occupation of the neighbouring country.  This was the first time in the long history of conflict in … END_OF_DOCUMENT_TOKEN_TO_BE_REPLACED