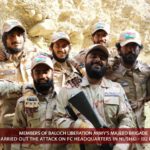 Jasbir Sarai On 2 February  2022, 16 Fidayeen (suicide squad) of the Majeed Brigade of the Baloch Nationalist Army (BNA) executed simultaneous attacks on two military bases of the Frontier Corps of the Pakistan Army in Nushki and Panjgur. These well planned and professionally executed attacks, code named Operation Ganjal, were carried out by nine Fidayeen in Nushki and … END_OF_DOCUMENT_TOKEN_TO_BE_REPLACED