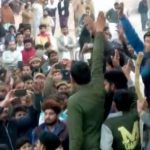 Jaibans Singh The incident of mob violence at Gurdwara Nankana Sahib in Pakistan on Friday, 03, January has raised deep concern worldwide and especially amidst the Sikh community. Reports suggest that, post the afternoon Friday prayers, a mob comprising of hundreds of Muslims lad siege on Gurdwara Nankana Sahib. The holy premises were pelted with stones and Sikhs offering … END_OF_DOCUMENT_TOKEN_TO_BE_REPLACED