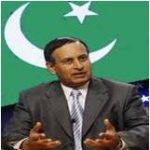 Simrit Kahlon There can be no smoke without fire; whatever may be said or implied, there has to be some credibility in the controversy involving Pakistan Ambassador to the US, Hussain Haqqani’s, offer to resign over the “memo controversy” . It is being said that on May, 09, a week after US commandos killed Osama bin Laden in a Pakistani garrison town, Hussain sent a memo to … END_OF_DOCUMENT_TOKEN_TO_BE_REPLACED