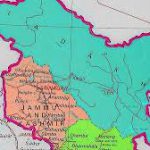 Mehtab Karan Singh Within two days of the momentous and historical change of bifurcating the state of Jammu and Kashmir into two Union Territories being implemented, the Union Government issued the modified map of India released by the Survey of India. The territories of Pakistan Occupied Jammu and Kashmir (POJK) were shown in their new dispensations with their respective … END_OF_DOCUMENT_TOKEN_TO_BE_REPLACED