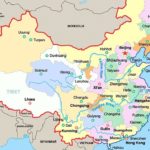 Colonel Alok Mathur (Retired) The South China Morning Post reported on 26 June, 2021 that a rail link between Lhasa and Nyingchi in China Occupied Tibet (COT) is now operational. The first electric high speed train steamed into Nyingchi station from Lhasa after travelling for 3.5 hours at 1030 on 25 June, 2021.The highest speed achieved by the train was 160 kmph. "This dream … END_OF_DOCUMENT_TOKEN_TO_BE_REPLACED