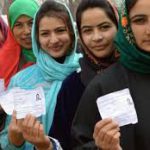 Jaibans Singh The breakdown of the coalition government of the Peoples Democratic Party (PDP) and the Bharatiya Janata Party (BJP) and institution of Governors Rule in the state was perceived to be a major setback. Added to it was the fact that the tenure of incumbent Governor, Shri NN Vohra, was at its end. Governors of Jammu and Kashmir have always been from a bureaucratic … END_OF_DOCUMENT_TOKEN_TO_BE_REPLACED