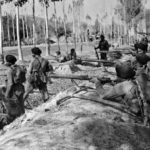 Jaibans Singh  On October 27, 1947, the Indian Army landed in Srinagar airport and thus began what is historically referred to as the Indo-Pakistan War, 1947-48.  The war witnessed many iconic battles over two campaigning seasons in areas ranging from Zoji La to the Kashmir valley, Poonch and Mendhar etc. The newly created state of Pakistan put in all the military might … END_OF_DOCUMENT_TOKEN_TO_BE_REPLACED