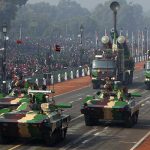 Jaibans Singh A few days back there were reports of a major counter-terrorist operation at the Indian military cantonment of Nagrota. Pakistani terrorists, who had probably infiltrated from Hiranagar, in District Kathua of the Jammu region, were accosted at a poll plaza near Nargota cantonment. Three of the terrorists were reported killed while one security person was … END_OF_DOCUMENT_TOKEN_TO_BE_REPLACED