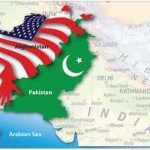 S Ranjan The negotiation for the resumption of the supply to the allies’ forces in Afghanistan through Pakistan is still going on. The Pakistan’s political class intended to play the anti-US card in the election year for which reason it closed down the supply route after the death of 24 of its soldiers in an air attack by the NATO air force on a Pakistan – Afghan border post, … END_OF_DOCUMENT_TOKEN_TO_BE_REPLACED