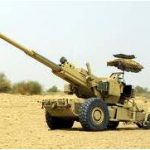 Prabhakar Gupta The unseemly public spat between the various organs of the Ministry of Defence (MoD) has raised concerns over the sluggish process of defence acquisition which has, according to Army Chief General VK Singh, caused considerable “hollowness” in the Indian Army. The criticality of this revelation surpasses all other areas of the ongoing spat which, in any case, is … END_OF_DOCUMENT_TOKEN_TO_BE_REPLACED