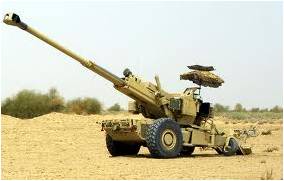 The unseemly public spat between the various organs of the Ministry of Defence (MoD) has raised concerns over the sluggish process of defence acquisition which has, according to Army Chief General VK Singh, caused considerable “hollowness” in the Indian Army. The criticality of this revelation surpasses all other areas of the ongoing spat which, in any case, is more personality and less professional oriented. In the middle of this criticality stands the acquisition of Artillery Guns, which has been on the cards for almost three decades with no progress to talk of. The important Artillery wing of the Army is in dire need of modernisation, more so since not a single new gun has been inducted since 1987 following the ghost of the Bofors scandal.

To meet the Artillery’s growing requirements, a $4 billion modernisation programme was cleared by the Government in 1999 aiming to induct roughly 2,814 guns of different types. The programme envisaged purchase and manufacture of towed, mounted and ultra light howitzers. 200 guns of 155mm/52-calibre mounted systems were to be purchased off-the-shelf through the Foreign Military Supplies (FMS) route, followed by indigenous manufacture of another 614 such howitzers under transfer of technology. Also on the wish list were air-mobile ultra-light howitzers (ULHs) for deployment in remote and inaccessible areas. By 2017, the outlay of the modernization plan was to go up to $12 billion. The projected completion date is now just five years away and, horror of horrors, not a single gun has been procured as yet.

After an unprecedented four rounds of trials which started in 2002, the acquisition process for towed guns abruptly got cancelled in 2007 without much explanation. Bofors, now owned by BAE Systems, had performed better than the Israeli Soltams and the now-blacklisted South African Denel in those trials. The widespread feeling was that the UPA government had developed cold feet at the last stage.

Since January 2008, MoD has issued three global tenders for 155mm howitzers and self-propelled guns for the deserts. Summer and winter trials were expected to be completed in 2009 and the contract by the first half of 2010. However, in June 2009, following disclosures of bribery in the Ordnance Factory Board (OFB), seven Indian and foreign firms, including ST Kinetics, Denel, Soltam and the German Rheinmetall were blacklisted thus stalling the procurement. Meanwhile, in May 2009, the Army sent a Request for Information (RFI) to 20 overseas defense companies for purchase of unspecified numbers of 155mm guns. Based on the RFI, a formal request for proposal was to be released so that the procurement process could commence, however, this too has been inexplicably delayed.

In the last field Artillery trial, which was cancelled by the MoD in July 2010, the Bofors gun and ST Kinetics’s IFH 2000 were the only guns in the competition. The trial was cancelled because STK’s gun was not calibrated to fire Indian ammunition. But SKT refutes this by saying that it was were not given adequate time to carry out the necessary recalibration. The tender got cancelled because STK’s disqualification made BAE Systems the only vendor, which contradicted the policy. The cancellation has pushed the field artillery modernisation programme, already behind schedule by10 years, at least two more years behind. The recent debarring of Singapore Kinetics along with six other companies has caused yet another serious setback to the Artillery modernisation programme. The options have reduced, especially since no Indian manufacturer has either the capability or technical knowhow to indigenously manufacture the guns.

The ban may indirectly help the Americans, as the desperate government might opt for procurement through the direct government route. On January, 28, 2010, the American Defence Security Cooperation Agency notified the US Congress of the administration’s intention to sell 145 M777 howitzers to India. Interestingly, the Pegasus gun of STK was the only other gun that made it to the trial stage in India, but was virtually knocked out of the race due to the bribery allegations. The question being asked now is whether these allegations were deliberately planted to give a boost to the tottering American arms industry. This government-to-government contract worth $ 647 million (Rs 3,235 crore), will bypass the process of competitive commercial bidding in favour of an American manufacturer, the BAE Land Systems, something that the Army is quite opposed to since it cuts out comparative trials and competitive price bidding.

With the Army’s Artillery needs not being met since 2000, it decided to modify its existing inventory of ageing 130 mm Russian guns with a barrel of the 155 mm gun to achieve an increased range of 39 kms. The contract was awarded to Ms Soltam of Israel and has just been completed. Meanwhile, to meet the inescapable requirement for additional Artillery, the Army acquired 80-100 pieces of 130mm field guns from the surplus stock of former Soviet Republics. A few months back, news reports indicated that the MoD may task the OFB to produce six units of the old Bofors howitzers as a test bed for further production. The OFB asserts that it has the necessary blue prints to carry out this task. Armament experts, however, have raised serious apprehensions more so since technology has moved on over the last two decades. For Indian Artillery, the situation has now reached critical levels. Even now, if kick-started, the stalled acquisitions will take three to four years before the first gun rolls into the firing pits. This really is an embarrassing departure from the earlier decision to bring in state of the art modernisation of the Indian artillery.

There are many solutions to the vexed issue. Penalties can be imposed in present contracts and hefty fines for future bids on defaulting companies. Tender processes can continue along with field and technical trials to reduce the time gap. Technical evaluation can be conducted in one go before going in for commercial bids to leave no scope for manipulation. Time bound deadlines, with penalties for delays can be imposed on both bidder and evaluator. In short, where there is a will many ways can be found, but this does not seem to be the dictum of the MoD.