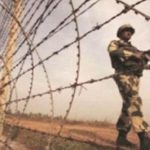 Brig. Anil Gupta (Veteran) An unexpected and sudden announcement merely 24 hours prior to the eve of the second anniversary of the Balakot air strike that had brought two nuclear neighbours to the brink of war has brought cheers on the both sides of the Line of Control (LOC). The announcement pertains to cessation of ceasefire violations which had peaked beyond 5000 in the … END_OF_DOCUMENT_TOKEN_TO_BE_REPLACED