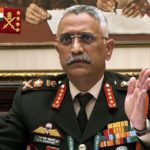 Jaibans Singh Every year, 15 January, is celebrated as Army Day in India. On this day, the first Indian officer, General (later Field Marshal)  KM Cariappa, took over as commander-in-chief of the Indian Army. The nation had every reason to be proud to have an Indian at the helm of its forces. It is customary for the incumbent Chief of Army Staff (COAS) of the Indian Army to … END_OF_DOCUMENT_TOKEN_TO_BE_REPLACED