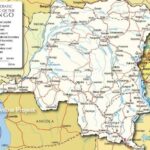 Col Alok Mathur, SM (Veteran) The Democratic Republic of Congo (DPR) is a country in Central Africa. It is also known as Congo-Kinshasa, Belgian Congo and Zaire. It is bordered by the Republic of Congo (ROC), also called French Congo, in North-West; Central African Republic in the North; Sudan in the North-East; Uganda, Rwanda, Burundi in East and Tanzania, Zambia and Angola … END_OF_DOCUMENT_TOKEN_TO_BE_REPLACED