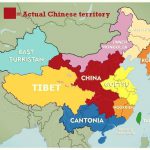 Jaibans Singh The history of South Asia and China was dominated by the British broadly from the 17th century  to mid-20th century. Today, almost seven decades after the exit of the British, India and China remain unable to reconcile to their new destinies and move on. Border demarcation done at the time of the British rule has become an issue and is dominating the … END_OF_DOCUMENT_TOKEN_TO_BE_REPLACED