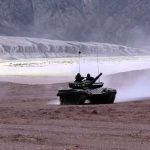 Jaibans Singh In the Mahabharata, the Kaurava Army had better warriors and Generals than the Pandavas; their forces were also much larger and better trained. It was on this strategic calculation that Prince Duryodhana decided to fight against the Pandavas. The Pandavas won because they had Dharma (Righteousness) on their side. The Kaurava Generals were not convinced about … END_OF_DOCUMENT_TOKEN_TO_BE_REPLACED