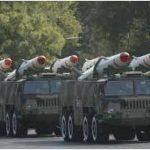 Defenceinfo Bureau Report China has announced that it would raise defence spending this year by 11.2 per cent to 670 billion yuan (Rs 5.26 lakh crore). "You can see that we have 1.3 billion people with a large land areas and a long coastline, but our outlays on defence are quite low compared to other major countries," said the government spokesman at a news conference before … END_OF_DOCUMENT_TOKEN_TO_BE_REPLACED