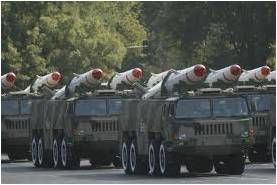 China has announced that it would raise defence spending this year by 11.2 per cent to 670 billion yuan (Rs 5.26 lakh crore). “You can see that we have 1.3 billion people with a large land areas and a long coastline, but our outlays on defence are quite low compared to other major countries,” said the government spokesman at a news conference before the annual full session of the National People’s Congress,the Communist Party-controlled legislature that will approve the budget.

This amount is thrice India’s allocation of Rs 1.64 lakh crore for the current year, and one-fifth America’s allocation of $530 billion (Rs 26 lakh crore) for 2013. The amount, when seen in the context of the country’s GDP gets pegged at a mere 1.3 percent, which is much less than India.

There are many reports that China has consistently fudged the figures over the years and that its spending on its Armed Forces is very much higher than what is declared. China is gearing up to face the US threat while getting into position to take on the mantle of a global super power. It has paid a lot of attention to indegenisation and today it has the capability to mass produce its defence hardware requirement in tune with its strategic thought process. It is fast building capability in missiles, cyber and satellite warfare and weapon systems apart from conventional weapon systems like tanks, artillery guns, small arms etc.

There was a time when both China and India used to look for import of weapon systems to maintain their forces. China has progressed in defence production by leaps and bounds to become a serious player in the global weapons industry while India is languishing where it was a couple of decades back. It is time for India to shed its complacent attitude and break the bureaucratic shackles which suppress indegenisation. An inability to do so will definitely expose the country to a repeat of the debacle of 1962, albeit at a much higher scale.