Baluchs and the Kurds 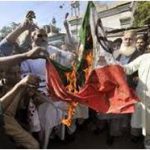 S Ranjan Baluchistan, the westernmost province of Pakistan is the largest in the country occupying 43 percent of its total area of 796,000 square kilometers. It is also the least populated with just five percent of the total population. This Province has been struggling for its rights ever since the creation of the Pakistan nation. In the absence of a positive response from … END_OF_DOCUMENT_TOKEN_TO_BE_REPLACED