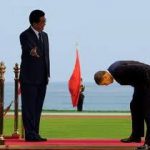 Prabhakar Gupta China is an enigma, an exotic puzzle that the best analysts attempt to decipher but remain partially successful at best. After remaining in the shadow of its towering communist cousin the Soviet Union for many decades it slowly and steadily built its national power to come to this stage where it has sounded the bugle to dislodge the self proclaimed sole super … END_OF_DOCUMENT_TOKEN_TO_BE_REPLACED