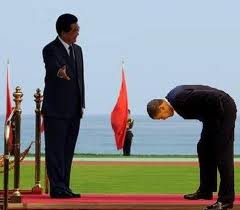 China is an enigma, an exotic puzzle that the best analysts attempt to decipher but remain partially successful at best. After remaining in the shadow of its towering communist cousin the Soviet Union for many decades it slowly and steadily built its national power to come to this stage where it has sounded the bugle to dislodge the self proclaimed sole super power – the United States of America. While some speculate about the relative strengths and weaknesses of the two countries there are many who are certain the tide has already turned and the Dragon has long since taken the lead. It must never be forgotten that economic projections continue to remain in the hands of the western world and certain manipulations to give a not entirely correct picture are not beyond the power brokers there. The situation also suits Chine whose leadership is in no hurry to occupy the top slot. The country is willing to play the game it is most adept at wait and watch. It is the proverbial oriental patience that is at play over here.

While China is not very worried about its economic position, it is in the geo-strategic domain that it faces certain challenges. There are legacies of the time when it was a weak Empire that need to be addressed. China has not hesitated staking its claims but has yet not played out its cards. It leadership continues to keep the game plan close to their chest.

There are many who feel that China will not hesitate in resorting to the military option to meet its strategic objectives.

A Hong Kong daily Wen Wei Po has gone to the extent of listing out six wars that China is likely to fight in the next fifty years. These include Taiwan (2020 to 2025); Spratly Islands (2025 to 2030); Arunachal Pradesh in India (2035 to 2040); Senkaku and Ryuku Islands (2040 to 2045); Outer Mongolia (2045 to 2060) and territories lost to Russia (2055 to 2060). The article, by itself, may be a part of the overall strategy planed out by the Chinese leadership. It could well be a means of letting the world know its intentions and wait for some of the clogs to fall automatically in the wheel. A study of the timeline suggests a calibrated upward spiral of the territorial ambitions. Clearly, China would like to try out its hand on the relatively easier issues and ride the success, if achieved over there, to the more complex ones.

What is of note is that India comes in the middle of the chart; which indicates that China would like to test out its strength in other waters before taking on its seemingly powerful neighbour, India. The article also suggests an indirect approach as the likely course of action that China would apply for this objective. This would involve creation of internal dissension in Assam and Sikkim while adequately equipping Pakistan to fulfil its ambition to wrest Kashmir from India. In other words, despite having a vastly superior military strength, China is wary to engage India in a direct confrontation.

Not everything, however, can move the way China would like it to move. India is no pushover politically and militarily. The North-Eastern states are not totally stable but nowhere is there a situation that could lead to large scale rebellion. Democracy has firm roots as is evident from the massive voting (82%) being witnessed in Mizoram even as this article is being penned down. Sikkim has thrown its lot unequivocally behind India and this is something that even China cannot change.

Pakistan is a different kettle of fish altogether. In the coming few years especially now that the US is reaching out to Iran, Pakistan’s utility for it’s most abiding ally will see a down word plummet. With no ability to stand on its own feet Pakistan is likely to lean all the more on China. As the US leveraged Pakistan for its strategic objectives in Afghanistan so will China leverage Pakistan for its strategic objectives against India. In this China is likely to find Pakistan more than willing is, therefore, this prong of the Chinese strategy against India has the potential of accruing maximum success.

There is a need to develop a proactive counter-strategy to offset Chinese objectives. First and foremost, India needs to get over its fear of China. The latest visit to the country by Prime Minister Manmohan Singh has not gone down as one of any substance for India. There are many in India who believe that the Chinese have taken more concession from India than there was reason to give especially with regard to the water and the borders issues. This is not the manner in which India should come across to the world so far as China is concerned.

It would be in India’s interest to render unmitigated support to the countries that figure in the Chinese list of aggression like Taiwan and Japan. India also needs to forge strong links with Russia and the Central Asian Republics. If the first prong of the Chinese strategy is nullified then the second prong will not come by at all. Should China attempt to militarily overwhelm Taiwan India should be in the forefront of international effort to come to the rescue. Even today there is a need to openly assist the downtrodden people of Gilgit-Baltistan who are fast being colonised by China with unrelenting support from Pakistan. Apart from the righteousness of this cause and the fact that those would are being afflicted are Indian citizens it has to be realised that it is from the firm base being created along the line of control that China will put in place its Pakistan supported ingression into Kashmir to weaken India.

The news Indian mountain strike corps is a step in the right direction but the road map has yet to find roots on ground. It should not become a case of the proverbial slip between the cup and the lip. Along with the military accretion the passive mindset needs to be revised. The only language that China understands is the language of power and it is this language that India should adopt in all future engagements. There is no reason to be scared of China but every reason to be prepared for all contingencies.