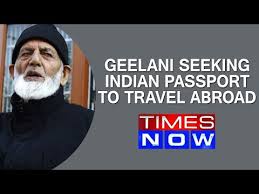 Tehreek-e-Hurriyat chairman Syed Ali Shah Geelani has applied for renewal of his Indian passport. Media reports suggest that he wishes to visit his ailing daughter in Saudi Arabia. The issue of a passport to Syed Geelani or any other separatist leader is a non-event for the Government of India. All the separatist leaders use Indian passports or their many foreign jaunts, including their paid for holidays in Pakistan. If the documentation and the process is correct the pass port office does not created any hurdles in issuing a passport.

The main point here is the manner in which Syed Geelani has, in a blatant act of perfidy, used this opportunity to garner cheap publicity. After a fair degree of politicking he entered his nationality as “Indian” in the passport application form and then generated a wholly avoidable media debate on the subject. To keep the pot boiling he clarified to the media that the same is being done out of compulsion and reiterated that he is basically a Pakistani at heart. He has tried to exploit the opportunity to build a sympathy wave by projecting himself as a deprived person being oppressed by a brutal state. His machinations are, of course, far from the truth

While dwelling on this case, one is reminded of the sacrifices that freedom fighters across the world have made for the cause that they believed in. Mahatma Gandhi, Jawahar Lal Nehru and other Indian leaders who spearheaded the freedom struggle completely disregarded their families  in their fight against oppression. The Iconic South African leader, Nelson Mandela, stayed in jail for 28 years for his fight against colonial forces. Aung San Su Kyii, the pro-democracy leader of Myanmar, left her family and a comfortable life in the United Kingdom to fight for her people within her own country and stayed in jail for more than 15 years. There are many other examples of such sacrifices.

Syed Geelani emotively showcases his sacrifice and selfless fight for the liberty and freedom of his people. Without going into the merits  of his case the question that arises here is – in terms of his commitment to his professed cause does he match up with the sacrifices made by other leaders who fought for the freedom and liberty of their people? The answer is a big NO.

Geelani has no compunction in using health facilities provided by the Government of India, he is looked after, free of cost, in the best government hospitals like AIIMS. His children have received the best possible education through facilities provided by the very government that he has spent a life time opposing; as a result,  they are now pursuing lucrative professions in Pakistan, Saudi Arabia etc. far from the miseries of Kashmir. His family members are comfortably settled across India, especially in New Delhi. His “selfless sacrifice” has definitely been good for his family.

No self respecting leader who is fighting for the freedom of his people would  bow before a government that he is fighting against for a reason as flimsy as that being given by Geelani. Revolutionaries are made of sterner stuff, they do not succumb to human frailties. They remain steadfast in their belief and true to their people.

Geelani has demonstrated an incapability to control his love for his own daughter? Are not all Kashmiri’s the children of Syed Geelani? Should he be forsaking all of them for the sake of one blood relative?

Having being thus exposed as a weak self centered man how will he extol his followers to make sacrifices for the cause that he professes? How will he face those who have followed him and lost their dear ones in the process?

While maintaining the sensitivity of the situation and wishing a speedy recovery to Geelani’s daughter one  cannot help but doubt his intentions. A question that is rankling everybody’s mind is – Is Geelani visiting Saudi Arabia only to meet his daughter or is there a bigger plan in place?

It is not out of the realm of possibility that while in Saudi Arabia Geelani will also meet many other political leaders and government officials of the country who have an interest in replacing the enlightened Sufi culture of the valley with Saudi sponsored Wahabi/Salafi concept of Islam. Undoubtedly his ISI handlers will also come there to meet him. Such meetings will create an opportunity for Geelani to rake in more funds and also understand the requirements of his masters.

If this be the case then once he gets back to Kashmir, one can expect a drastic increase in disruptive activities since he will be flush with funds fortified with explicit directions with regard to their utilisation. The government of India should remain wary of such anti-national activities that Geelani will possibly indulge in.

It can be reasonably deduced that Geelani is himself not serious about his cause and the ideology of freedom that he espouses all the time. He gives to the same only lip service. He does not seem to be convinced about the justification of the cause. In fact, no right thinking person in the world is convinced about it. Geelani says that Kashmir should become a part of Pakistan while many in Pakistan themselves feel that the country should be trying to consolidate what it has rather than looking for other territories on which they have no claim whatsoever. Geelani says that he wants freedom for his people while the fact is that they are already enjoying the same as a part of the largest democracy in the world.

His recent actions prove that Geelani is nothing more than a self serving opportunist. It is time for the people of Kashmir to see the reality as it is and not get swayed by his emotive foreign sponsored and foreign funded propaganda.