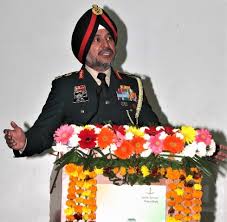 Speaking on the sidelines of an Old Boys Association meet of Sainik School, Kapurthala, which is his Alma Mater, General Singh said, “Surgical strike is one of the options available to the Army. It had a positive impact on the country and we have been able to curb terrorism to a great extent with its help.”

When asked about Pakistan Prime Minister Imran Khan’s statement acknowledging his country’s involvement in November 2008 attack in Mumbai, the General said that what has been said is already known and having accepted the same, they should take action against those involved. Speaking about Pakistan sponsored terrorism in Jammu and Kashmir, he said, “Our strategy to combat terrorism is quite clear. Whenever Pakistan tries to do something in Indian territory our security forces are ready to fight them back.”

Lieutenant General Ranbir Singh urged the students of his Alma Mater, Sainik School, Kapurthala, to strive for excellence and put in their sincere efforts in realising their potential in scholastic and non-scholastic pursuits. He also exhorted them to be worthy of the high traditions and ethos of the school. “You have a responsibility to carry forward a honourous tradition of dedication and excellence built over the years by cadets who have passed out before you,” he said.

Lieutenant General  Singh also congratulated the faculty for their services, keen involvement in imparting a high standard of training andwinning the Defence Minister’s Trophy; and for sending the highest number of cadets to the National Defence Academy (NDA) for a record seventh time. He further praised the school for having the maximum number of serving teachers who have been recipients of the prestigious President’s Teachers Award.