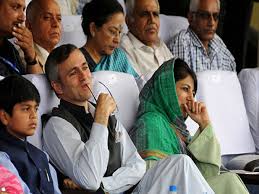 Jammu and Kashmir is definitely the most talked about state in India. Reams are being written about the situation and environment prevalent there. Every incident of violence, social disruption, perceived economic inequality, elections, government formation, et al is meticulously recorded and spoken about by a whole range of “experts.” What is normal for other states and regions becomes extraordinary there.

Jammu and Kashmir is also (probably) the least understood state; it is so because the narrative sticks to the vested interests of the narrator who is normally a politician with a self serving agenda. It is a state where political parties have been created and coalitions stitched up blatantly to serve Individual interests. Any attempt to change the self serving status quo of some who have positioned themselves as “leaders of the people” elicits an abrasive reaction from them which is, in turn, lapped up by a media, especially the electronic segment, due to its sensationalist element. It is for this reason that, despite all efforts, the situation in the state has not changed in the last seven decades. What does not suit these “leaders” stays under wraps.

Delimitation is one such taboo subject in the politics of the state. One more parliamentary election is underway in the state without any reference to the sensitive issue. In Jammu and Kashmir, the delimitation of the Constituent Assembly was first announced by Karan Singh in 1951. It was to be carried out on the basis of the census of 1941. 43 Districts were allocated for Kashmir region, 30 for Jammu and two for Ladakh even though the 1941 census showed distribution of the population as – Jammu, 20,01,557, Kashmir, 17,28,686 and Gilgit/Baltistan, Kargil and Ladakh, 3,11,915. Though geographically and population-wise Jammu was much larger than Kashmir, yet more seats were allocated to the latter. Another injustice was done when one state assembly seat was allocated over a population of 60,000 in Jammu whereas it was 40,000 in the case of Kashmir. All this was done on the behest of Sheikh Abdullah even as the Union Government under Pandit Jawaharlal Nehru remained complacent.

The process of delimitation was carried out in J&K in 1995 and the next round was slated for 2005, since it has a ten year cycle. But, in 2002, the ruling National Conference Government froze delimitation until 2026 by amending the Constitution of the state. As things stand now the State Legislative Assembly has 87 seats of which 46 are from Kashmir, 37 from Jammu and four from Ladakh. For the Parliament there are two constituencies in Jammu, three in Kashmir and one in Ladakh.

Excluding 120849 Sq. km area of Jammu and Kashmir that is under illegal occupation of Pakistan and China, the state with the Indian Union comprises of 101387 Sq. km area. Of this, Kashmir comprises only 16 percent of the land mass whereas Jammu and Ladakh cover a geographical area of 84 percent, the largest portion being Ladakh. Kashmir has on paper approximately 10 percent more population than Jammu, but it is so because Lakhs of voters in Jammu region like the West Pakistan refugees and those belonging to the Valmiki/Gorkha community, who have been living in the state for decades, have not been granted citizenship by successive Kashmir centric governments. Also, Lakhs of Kashmiri Pundits who have their votes registered in Kashmir are no longer living there but in the Jammu region and elsewhere across India. A correct census would take the population figure in Jammu beyond that of Kashmir.

The aforementioned data clearly indicates that the state has an unwarranted concentration of power in one region (Kashmir) and consequent lack of representation of the remainder two regions (Jammu and Ladakh) despite their being more significant in the terms of area as well as population. There have been many protests but these are sidelined because they do not have in them an element of sensationalism and “good copy.”

India has in place Delimitation Commission Act, 1962, according to which the distribution of the seats must be done on the basis of the latest census figures, geographical compactness of the areas, physical features, existing boundaries of administrative units, facilities of communication and public convenience in order to ensure that the representation of the people is balanced and just. Sadly, the Act has no locus-standi in Jammu and Kashmir.
So, even as the people of Jammu and Ladakh regions involve themselves in the spirit of democracy by coming out to vote in large numbers they remain on the back foot when it comes to representation of their interests and aspirations. The people of Kashmir region, on the other hand, are petulant and unconcerned about democracy, and yet, they have good representation in the Parliament. The same process is being witnessed in the ongoing parliamentary elections also.

This is the worst from of political opportunism imaginable. If the situation prevalent in the state is opined upon by an international expert of constitutional democracies he/she would be appalled. The self serving leaders get away by threatening large scale protests should the status quo be tampered with. The ground situation, however, is detrimental to the cause of the common man while serving the interest of only a select few. The leadership in Kashmir has created a feudal set up where the only voice coming out is their own. They may fight against each other for power at the state level but when it comes to engagement with the centre they speak in one voice.

To wait for a decade for the situation to be corrected will amount to doing grave injustice to the people of Jammu and Ladakh regions. Delimitation in Jammu and Kashmir should form the core agenda of the incoming Parliament. All legal and legislative remedies need to be put in place to ensure that it is done before elections at the state level are announced.

(Onkareshwar Pandey is a senior Journalist and Geo-political analyst)