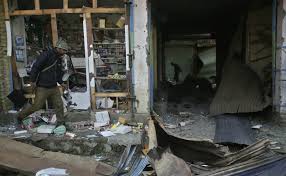 The recent IED blast in Sopore that has left four police officers martyred and two injured has heralded a new phase in the ongoing foreign sponsored terrorism prevalent in the Kashmir valley. The cowardly attack on security personnel, who were doing their duty, is highly condemnable and has elicited widespread revulsion and disgust within Kashmir, across the country and the world.

The spineless attack has also highlighted the need to carry out a reassessment of the security situation in the region, in view of the fact that terrorist have resorted to the use of IEDs after nearly three years. The last IED attack in the valley was reported in 2015.

Foreign sponsored terrorism in Jammu and Kashmir has followed a distinct, identifiable pattern since its inception. There was a time, nearly three decades ago, when thousands of trained, battle hardened terrorists, freshly out from Afghanistan, were infiltrated into the state. These terrorists moved in large groups and carried out frontal attacks on security forces.

This phase of terrorism was eradicated by the security forces with sustained operations carried out with active support of the local population.

In the next stage, depletion in the number of terrorists available led to Fidayeen (Suicide) attacks and ambushes of security patrols. With time the quality of the terrorists being infiltrated by Pakistan witnessed a downslide and the numbers too reduced drastically. This led to a drastic reduction in their capacity to launch Fidayeen attacks. Sporadic attempts, however, continue depending on the capability of the terror planners and managers in Pakistan to cajole their depleted cadre into giving up their miserable lives. Security forces have also evolved better operating procedures to deal with such attacks.

Better preparedness by security forces and lack of training/commitment of the terrorists has led to Fidayeen attacks too losing their sting in the last few years.

It is quite apparent that terrorist are feeling the heat of the sustained counter operations that the security forces have been carrying out since the  beginning of the previous year, on being given a open ended go-ahead by the government.

The dire state of the terrorists in Kashmir has become a reason for their resort to cowardly stand-off attacks with IEDs and grenades. This seems to be the pattern that is now emerging.

“After 2015, this was the first incident of IED blast. We have to think about how to deal with it and chalk out a new strategy to tackle the issue,” said Muneer Khan, Inspector General Police, Kashmir, while briefing the media on the Sopore IED blast. The statement has depth and needs to be taken seriously.

Grenade attacks and IED blasts are indiscriminate weapons of terrorism that cause more injury to civilians than to the security forces. There use goes against the grain of the so-called freedom struggle that the terrorists profess to be carrying out on behalf of the people of Kashmir. Sadly, such sentiments are not likely to deter the terrorists from their nefarious designs, thus the need to put in place effective methodologies to counter the emerging menace.

First and foremost, the security forces need to step up on vigilance and intelligence gathering to defeat the terrorist design. Active support by the people is most important! While pursuing their day to day routine, the people need to stay vigilant to notice any untoward activity and report the same to the nearest security post. They need to follow all laid down security precautions in an organised manner.

The blast in Sopore took place at a time when a separatist initiated strike had caused a shut down. This indicates that the nexus between political activity by the separatists and the violence perpetrated by terrorists is very much in place. The government needs to take note of this aspect and initiate appropriate action to ensure that anti-national alliances of this nature are not allowed to exist, let alone thrive, as they seem to be.

Another interesting aspect is the manner in which the incident has been covered by some segments of the local print media. The location, casualties to police personnel and the loss to civilian property have been covered in graphic detail by these newspapers; that the blast took place in a commercial area has also been specifically highlighted.  There is, on the other hand, no reference to the condemnation by the Chief Minister of the state and other national leaders and no coverage to the loss suffered by the families of the victim Kashmiri’s, who lost their lives while performing their sacred duty as policemen.

It is quite apparent that the underlying objective of the reporting was to instill fear among the locals about the capacity of the terrorists to strike at will and kill them. Such media is sold out to the terrorist cause; it represents reprehensible, yellow journalism that the government needs to curb with all means available to it.

“The vortex of violence in the state needs to be broken and for that every section of society has to work shoulder to shoulder,” said Chief Minister Mehbooba Mufti in the wake of the attack. One would like to assure the chief minister that the whole o f India and the entire world are with her as she pursues the objective of breaking the back bone of the terrorists. All measures that she takes to break the vortex of violence will elicit unmitigated support. She only needs to proceed with a strong heart.

So far as the security forces are concerned, they need to move with resolve and caution to break the backbone of the terrorists who, by resorting to this cowardly attack, have exposed themselves as being nothing more than desperate, inhumane and pathological killers. Terrorists are now gasping for breath and they need to be hunted down like the cowardly rats that they are in the shortest possible time.

(Jaibans Singh is a reputed security analyst and author)