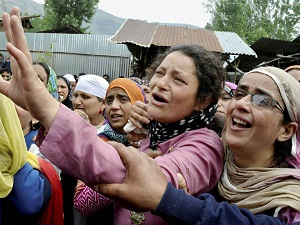 The Sopore killings have become quite an enigma; an unfortunate one though, since innocents are losing their lives in the hands of unknown criminals on the rampage. The six persons killed so far are either those working for the government or ex-militants. Both categories have been targets of terrorists in the past also, the killing of government personnel provides instant publicity and a morale boost to the dying terrorist movement; ex-militants are killed in punishment for having left the cause, to instill fear in the operating cadre and due to personal rivalry.

J&K police is responsible for maintaining law and order in the area where these incidents are taking place, paramilitary forces are there to assist the police.  The army carries out counter terrorist operations only on specific information and along with the police, it does not get involved in routine law and order activity.

Holes in the procedures and processes of J&K police have become quite visible due to the incidents. In the initial stages the force treated the matter quite casually as a sporadic terrorist act. As the restlessness among the people grew due to an increase in incidents, the government galvanised into action. Chief Minister Mufti Mohammad Sayeed presided over one of his infrequent meetings of the unified command and expressed concern.

The heat cause d a flutter in the police department and led to investigations in the case. The police surmised that a new and relatively unknown terrorist organisation was possibly involved in the crimes. It has since put up posters declaring a bounty on the heads of two terrorists who, they profess, are behind the murders.

The initial apathy of JK police is quite inexcusable, in an area as sensitive as Sopore the force is expected to have in place an intelligence set up that gives information before an incident takes place and not after six precious lives have been lost. Terrorism cannot be dealt with in such a casual manner.

Lack of application on the part of J&K Police has led to dangerous rumour mongering; the blame game has, most undesirably, spilled over to government agencies, especially the security forces. If the case had been resolved in a timely manner, disruptive forces would not have taken this undue advantage. The ball would have, in fact, been in the other court with the terrorist forces exposed for their evil designs.

The media has, yet again, played a negative role; the extensive and sensationalist publicity given to the murder of the telecom operators motivated the terrorists towards indulging in more such killings in order to garner more publicity. The turn of events indicate that they were not far off the mark in their assessment.

It is also apparent that the conciliatory political posture adopted by Chief Minister Sayeed has cut no ice with the separatists. They are going overboard in exploiting the situation by creating disturbance and disorder. Instead of providing a healing touch to the people of Sopore they are applying salt to their wounds and adding to their frustration with their jaundiced speeches and frequent shut downs enforced by their goons.

The failings of the state apparatus have led to the overnight creation of new terrorist organisations. Tehreek-e-Taliban Jammu and Kashmir has surfaced in addition to the Lashkar-e-Islam. The two organisations are now trying to gain a dominant position; they have put up posters threatening people of dire circumstances if they indulge in “un-Islamic activities.”They are threatening to attack gasoline stations fuelling police vehicles, cable operators screening Indian movies, shops selling alcohol and locals providing jobs and accommodation to migrant laborers.

The sudden rise of these two organisations has caused ripples in the terrorist set up in Pakistan too. Syed Sallahudin, leader of the Hizbul Mujahideen and Chairman of Pakistan sponsored United Jihad Council (UJC) seems to be worried about the advent of this new set up as a competitor. He has denounced them as by-products of the Ikhwanis and linked with the Indian security forces. He has gone on record to state that Lashkar-e-Islam is an “India-sponsored organisation.”

“Jihad Council makes it clear that whosoever is involved in these killings irrespective of his affiliation with any organization or not will be treated as Indian agent and anti-freedom movement element and he will be put to death,”  Hizbul Mujahideen has stated.

Sopore and its neighbouring areas are enveloped in a pall of gloom due to this new threat which comes at a time when the township was just about settling down to a relatively peaceful environment. The people are, quite naturally, anxious and apprehensive about the possible return of the dreaded days of terrorism all over again. Congress leader and Sopore MLA Abdul Rashid Dar, while interacting with the media said that there is no trace of government or police in Sopore.”They have no clue what is going on there or who is doing it,” he said.

The ball is now firmly in the court of Chief Minister Sayeed, he has to take credible steps to bring back the rule of law and restore the confidence of the people. A first step in this direction would be to acknowledge the importance of security forces in the state, especially the Kashmir valley. It is now amply clear that dormant terrorism has the potential of raising its ugly head at the smallest opportunity. He must immediately cease his endless diatribe against the Armed Forces Special Powers Act (AFSPA) and other such enabling legislations under which the security forces operate; instead, he should extend moral and institutional support to them for effectively discharging their sensitive and challenging duties.

Chief Minister Sayeed needs to get into damage control mode soonest. This would be possible by on maintaining the security threshold while moving forward the agenda of development. He was elected for this reason and not to give flight to his fanciful ideas of self rule etc.