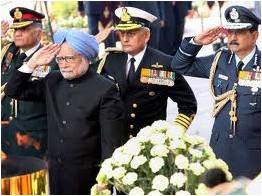 The Chief of the Indian Army, General VK Singh, while interacting with some school children in Jaipur on Sunday, 15, April, reportedly commented. “An army of deer led by a lion is to be feared more than an army of lions led by a deer”. It would be safe to conclude that the Chief was motivating the children to develop leadership qualities in order to become productive and enlightened citizens of the country.

Ajay Shukla, an eminent defence journalist, has, in a very interesting article in the Business Standard “Of lions, deer’s and military leadership” dated April, 17, 2012, also carried in his blog, http://ajaishukla.blogspot.in/, professes that a deer cannot suddenly become a lion and a lion serving amongst deer can never reach the top because deer will only allow deer to go up. With this as a preamble, he goes on to prove that in today’s Army the younger serving generation is disillusioned with the older serving generation and vice versa. He also says that somewhere down the line leaders become conformists and passive; a trait that is being promoted in the higher annals of the army’s leadership. All this is nurturing a feeling of dissatisfaction and low self esteem amongst the soldier community both serving and retired.

Shukla has, very lucidly, used the comment made by the Chief to articulate his views on military leadership as it stands today. He has said what most soldiers, serving and retired, feel. He has, conveyed his thoughts most profoundly and has opened a new and interesting arena for debate.

While agreeing with his views, I wish to further the debate by adding a few more facets. First and foremost is this fascination that soldiers have with animals since times immemorial and across nations; Richard the Lion heart, Rommel the desert fox, Tipu the tiger of Mysore, Liberation “Tigers” of Tamil Eelam to give just a few examples. Each towering military leader somehow gets associated to some animal or the other. The Indian army, in keeping with its British moorings, goes a step further; all commanders are tigers, second-in-command are lambs, adjutants are Lions and the list goes on. While in service, as a second-in-command, I strongly resented being called a lamb and called upon the regiment to address me as “Kingfisher”, I also could not get over the animal fixation. My question now is – what have the animals done to deserve this comparison? They are quite happy being animals, they have never shown any desire to take the place of humans, soldiers or otherwise, so why do we soldiers wish to unnecessary impinge upon their domain.

On a serious note, we will try to articulate the repercussion of this fetish. A tiger is very strong, fit and agile when he is young; as time passes his mind remains stagnant and physical strength goes down. In the case of a human being, the physical strength may go down but, with age and experience, the level of consciousness evolves. Therefore, an officer in his younger days can roar like a tiger but continued efforts to remain the same tiger with the same roar when senior ranks and responsibilities beckon does not really serve the purpose. A time comes when an officer has to stop roaring and start thinking. In the context of modern warfare this time comes very fast.

If we start looking at officers as human beings we will automatically expect them to develop new qualities as they go up the ladder. Senior officers would become conscious of the need to exhibit uprightness, honesty, vision, sophistication, maturity, strong will, decisiveness and a host of other qualities that they require to do justice to the high office that they are holding. Senior leaders are constantly under scrutiny, by their subordinates, by their peers, by their seniors, by the organisation, by the Nation, in fact by anybody and everybody that they are associated with. Therefore, they need to evolve, imbibe new qualities and fine tune those already existing to do justice to their responsibilities. This constant need to behave like a tiger definitely comes in the way of such evolution. We need to leave the animal kingdom to mind its own affairs and reach out to the realm of human consciousness.

My second point, Ajay Shukla is from the same regular course as I am. I am in complete agreement with him with respect to the ability of those of our course mates who have been approved to the rank of Major General. I say this more on the premise of a conviction that all those selected by the Services Selection Board to become commissioned officers in the Indian Army are capable of taking responsibility that comes with the all ranks from Lieutenant to Field Marshal. The bottom line is opportunity.

I would like to put across a different point of view than Shukla’s in this regard. From our course about eight to ten gentlemen cadets from the super block (First twenty) were commissioned in the Armoured Corps (including Shukla and of course excluding me); of these only one rose to the rank of Brigadier and none figures in the latest list of Major Generals. Most have left the army voluntarily after being superseded. Most are doing extremely well in the civil street, where they are not required to be tigers and things like that. So what happened? Was the assessment process faulty in the academy or is the professional assessment criterion at fault? If these officers had lost it somewhere down the line, they would not have been so well placed in the civil; they were all good, intelligent, motivated men so they found success in their second careers also. The loss was that of the Army and introspection should also emerge from the army.

With respect to the last very relevant aspect of conformity that Shukla has touched; while being in agreement, I would be slightly more kind to the senior officers. I feel that certain amount of conformity is a part of the aging system. See how one finds it difficult to fight with his/her spouse after turning fifty. Nevertheless, consciousness amongst the high ranking officers of the need to deliver due to the responsibility and faith reposed upon them the Army and the Nation should give motivation to deliver beyond capability. This, therefore, becomes a totally personal issue. He who wishes to do it will do it. So let us hope that better times will come as good sense prevails.