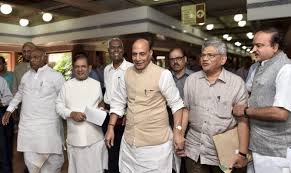 The unrest in Kashmir is showing no signs of abating. Effort is being made from the political, intellectual, social and other relevant sectors to break the impasse and stop the cycle of violence, but a positive result is not forthcoming.

Many Union ministries, particularly, the Home and the Defence Ministries are in close touch with all levels of the state machinery. Home Minister Rajnath Singh and Chief of Army Staff, General Dalbir Singh have made several visits to the state.

It is unfortunate that the media has failed to understand, comprehend and grasp this maturity exhibited by the centre. It made frequent calls for a statement by the prime minister.

Prime Minister Modi has articulated his vision of dealing with the situation within the framework of the Constitution and on the basis of the concept of “Insaniyat, Jamooriat, Kashmiriyat”  visualised by Shri Atal Bihari Vajpayee, former Prime Minister of India.

He has also expressed grief at the loss of life and limb and concern for the indoctrination of the youth to follow the path violence. He has termed as unfortunate the situation where those who should have books and computers in their hands are now pelting stones.

Despite the honest attempt by the prime minister to bring positivity and purposefulness in the approach to the problem, the haranguing has not stopped. Opposition has termed his statements as too less and too late and has expressed apprehensions about his motive. Media is in a state of tizzy, bent upon sensationalising the misery of the people of Kashmir to whatever extent possible.

The wise statements and appeal made by Prime Minister Modi, thus, lost their impact due to undesirable criticism and politicisation. The wayward nature of the debate in the media has generated a feeling among the agitators that the centre is on a weak wicket.  This is one big reason for the agitation getting prolonged.

The lesson learnt is that the original strategy adopted by Prime Minister Modi and his government to allow the state government to deal with the essentially local problem was wise. It should have been followed to the end.

As part of the process of engagement and outreach evolved by the centre, an all party delegation was recently sent to Jammu and Kashmir; the delegation spent most of its time in the Kashmir valley.

Some very senior and respected parliamentarians who formed part of the delegation went out of their way to reach out to the separatists by even going to their houses to meet them. They were snubbed by the separatist leaders in a manner that has evoked outrage.

What prompted the separatists to stay away from dialogue? One reason could be that they have no control over the agitators and, as such, are unwilling to make a political commitment that they would not be able to implement. They are simply hiding to escape exposure. There can be no bigger example of their irrelevance.

In view of the weak and marginalised position of the separatists, many analysts and Kashmir experts have expressed a view that they should be kept out of the engagement loop. The merit of the view is no apparent.

It, therefore, is established that there are gaps in the Kashmiri leadership which some unscrupulous elements are trying to fill. Hence, there is a need for reevaluation of the situation and responses.

Some define what is happening over there as a political problem while others define it as a law and order issue. It is actually a bit of both.

It is a law and order problem to the extent that the young boys who are spearheading the agitation lack both maturity and understanding. They are victims of a well planned indoctrination against the Indian state carried out with foreign funding and are giving vent to an emotional upheaval caused by constant exposure to a hate filled environment.

The fact that they are demanding Azaadi (freedom) in a free country and a free polity clearly indicates the extent of unreasonableness to which they have been programmed by foreign forces.

As things stand, only by the people of Kashmir, the mothers, the sisters, the families and leaders of society who can drive some sense into the young boys.

They need to be made to realise that inflicting self injuries is not going to give any positive outcome. Change can be instituted only on the basis of a sound foundation of pragmatism, righteous and justification. They need to first make themselves capable of bringing about the changes that they desire and then attempt to do so in a civilized manner.

The local initiative to calm down the agitators can be followed by a larger political exercise to identify the cause of the unrest and evolve a strategy to ensure that it does not recur again.

It is here that the centre has a larger role to play, but again in concert with the government as well as the political spectrum of the state.

To exemplify, let us see how the security issues can be addressed in a new perspective.

It is apparent that there is a feeling of animosity against the paramilitary forces. One option to deal with the same could be strengthening of the Jammu and Kashmir Police followed by reduction, if not removal, of the paramilitary deployment. For doing something like this the initiative has to come from the state and assistance can be provided by the centre.

The impasse that is causing untold damage to Kashmir can be resolved by the Kashmiris themselves. The centre can, at best play a supportive role that it is willing to play. It is up to the people of Kashmir to accept this holy assurance.