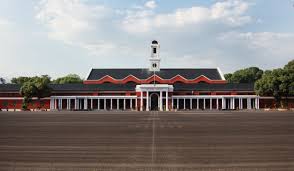 The Indian Armed Forces are deeply respected by all citizens of the country. The forces, in turn, leave no stone unturned to live up to the respect and adulation that they receive.

Apart from their responsibility of guarding the nation against external aggression and internal security challenges, the forces involve themselves actively in all issues that affect the nation. They exemplify peaceful coexistence of all communities and religions, so important to maintain the secular fabric of the nation. In times of natural calamities they respond unilaterally to assist in rescue, relief and rehabilitation going to the extent of donating a part of the salaries and rations etc. for the victims.

The forces serve as role models for the country, especially the youth. This exalted status makes them the best ambassadors for social movements at the national level.  It is only natural, therefore, for the services to respond to the Swachh Bharat (Clean India) call given by Prime Minister Narendra Modi.

Environmental conservation and cleanliness is intrinsic to the character of the Armed Forces.  In view of their excellent track record in maintaining the highest standards of cleanliness the Armed Forces can make a sterling contribution towards the success of this noble mission.

Cleanliness in the Armed Forces is a command responsibility and instructions to maintain personal hygiene, clean Barracks (especially bathroom and kitchens) and clean surrounding are regularly given in all units and organisations. Hygiene and sanitation are deeply embedded as prerequisites for good health of the soldiers.

Military cantonments are, by far, the cleanest areas in the country. In many cases they surpass foreign locales in layout, cleanliness and maintenance of green cover. In order to maintain the high standard, modern equipment is purchased to make the work easier and more efficient for the composite conservancy staff.

The “Shramdan” (Social service) concept Is followed by the Armed Forces as second nature. All defence personnel and their families participate in cleaning up the houses and the areas where they live. The common area is cleaned through central resources.

Families, in particular, are involved in tree plantation and maintenance, cleanliness drives etc. Talks, lectures and interactive sessions are organised for soldiers and their families in order to generate awareness about hygiene and sanitation. Events like Swatchta Pakhwada, cleanliness drives, and run for a clean environment are organised regularly.

Army, Air Force and Navy Schools pay special attention to education on cleanliness and environment. Students are taught the benefits of cleanliness while being motivated to take part in tree plantation etc. Most military schools are spotlessly clean at all times.

Army units deployed in remote areas, that have a sensitive ecology to maintain, adopt the role of environment conservators and initiate many projects to maintain and improve upon the natural habitats. The local population is involved in these initiatives. Such involvement assists in educating the locals about the necessity to conserve their ancestral habitat. More importantly the process helps build an all important bond between the army personnel and the locals.

It is second nature for long range patrols that are sent to remote areas in different terrains to clean out the areas from where they pass. All expeditions bring back their own bio-degradable waste and also the litter that they see scattered around.

It is heartening to see soldiers cleaning up the Siachen Glacier from where it is reported that 60 plus tonnes of garbage has been removed since 2014 when Swachh Bharat Abhiyan was launched. Such an example can serve as a great motivator for the entire nation.

The Indian army set up an Ecological Task Force (ETF) in 1982, more than three decades before cleanliness became a national agenda under Swachh Bharat Abhiyan.

The task force was mandated to do afforestation and eco-restoration in areas that had suffered environmental degradation. 128 infantry Battalion (TA) was the first ETF and was deployed in Rajasthan, 80 kms off Bikaner. Within seven years the battalion created a beautiful green sanctuary where nothing grew earlier. Later two more ETF were raised and they did sterling work in Mussourie Hills of Uttarakhand and wastelands in Samba, Jammu and Kashmir.

There are reports of the intention of the government to raise more ETF’s to assist in the Namani Ganga Project. They will clean the banks of the Ganga at designated zones followed by desalination, water purification and mainly afforestation.

The Armed Forces, as ambassadors of cleanliness, can invite the general public to their cantonments to see how the areas remain so clean and well maintained mainly because of self discipline and voluntary effort a of all the residents. Some activity like Swachhta Runs can be conducted within cantonments and used as backdrops for motivational documentaries etc.

After decades of training, cleanliness becomes a second habit for the soldiers and on retirement they are the best ambassadors for the concept in their villages and communities. They are the true soldiers of the “Swachh Bharat Abhiyan’ so close to the heart of the prime minister and their contribution needs to be effectively leveraged.

The response of the Armed Forces to the recent call of “Swachhta Hi Seva” given by the Government for a two week cleanliness drive that culminated on Gandhi Jayanti was in tune with their tradition of actively participating in social responsibility drives. The high regard that the people of India have for their soldiers has, on many occasions, been exhibited by the willingness of the latter to follow the example set by the former. The military concept of Shramdan provides a potent stage for creating awareness in the field of cleanliness.

The continued involvement of the Armed Forces in the Swachh Bharat Abhiyan would contribute greatly to the success of the movement while bringing social cohesion between the soldier and the common man. It is an idea that should be given maximum impetus.

(Jaibans Singh is a reputed analyst, columnist, author and commentator)