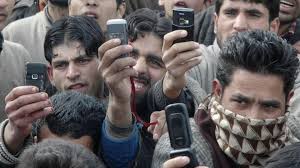 Social media is overwhelming the lives of people across the world, young and old, big and small, educated and less educated, all are seen bent over their smart phones and viewing content of their choice. Kashmir is no different except for the fact that most of the content viewed over there is propagandist in nature and posted by Pakistanis and other enemies of the Kashmiri people, with the specific purpose of causing dissension and discord.

The advent of social media as a potent tool came about in 2015 when a photograph of 11 terrorists operating in Kashmir was posted on various social media forums. This was the time when the number of smart phone users in Kashmir had witnessed a quantum jump, especially so, among the youth. The poster boy of this group was Burhan Wani who went on to become the social media face of the terrorist movement.

His value for his Pakistani masters was not his skills as a so-called Mujahid; it was his ability to attract more and more Kashmiri youth into the fold of terrorism and for this he was used to the hilt. This exposure triggered a man hunt which led to his killing by the security forces in July 2016. His death led to another spate of vitriolic and propagandist social media content. Many local youth joined in as terrorists simply to post their selfies, pictures and online videos on social media, giving a huge boost to recruitment of locals into the terrorist fold.

The Pakistani propaganda machinery fully understood the bonanza that had fallen in its laps and exploited it to the hilt. Sophisticated content was generated and continues to be generated to radicalise the vulnerable boys, create a false sense of bravado and a certain romanticism for the gun. Anti-India activities and terrorism are made to appear legitimate even as the potential recruits are projected as the victims of the Indian state and saviours of Kashmir. Unfortunately, a segment of the youth, however small, falls for this perversity without realising the self destructive consequences.  Some take to stone pelting which is also an activity given due cognisance in the propaganda content.

There is today a whole army of net content providers sitting in Pakistan and carrying out Propaganda activity meant to increase the threshold of radicalisation and hate mongering. It has very aptly been defined as the “weaponisation of social media.” The idea is not only to lure the local youth of Kashmir on to the path of violence but also to reach out to the rest of the world. The 24/7 online activity reaches out to millions across the world every day. The security forces operating in Kashmir, especially the Indian Army, are the main target of this jaundiced campaign. It also covers incidents of unrest in India by blowing them out of proportion, speaks of persecution of minorities and other forms of so-called atrocity especially so in Kashmir, it ridicules the Government and the Armed Forces. All of this is done through posters, cartoons, videos and articles where the truth is morphed and concocted to give it the desired treatment.

Social media is being used in support of terrorist and disruptive activities. As soon as a counter-terrorist operation is launched, word is spread through social media, mainly WhatsApp, for people to gather at the site to disrupt the proceeding with stone pelting, sloganeering and even physical intervention. For the obnoxious activity of stone pelting, crowds are collected at designated areas and made to melt out with equal alacrity with exit routes being posted online. Separatist leaders use social media extensively to give their illegal calls for Bandhs (lockouts), Hartals (strikes) and marches etc. Threats to the people to discourage them from voting in elections or from attending recruitment rallies of security forces and other such progressive activities are posted on social media.

Spread of fake news is yet another area where the social media is being used extensively. With no accountability it becomes the most apt platform to raise passions with exaggerated reports. The basic objective is to create a sense of insecurity and mistrust against the Indian state and the people of the country in the minds of the Kashmiris’.

Attempts are being made by Indian agencies to curb such activities, some are successful and for others alternatives are found by the enemy. Face Book has been censoring posts and user accounts, but when one profile is shut many others come up.  The government blocked the internet in Kashmir for five months in 2016 but the people including the terror groups and even government employees resorted to the use of Virtual Private Networks (VPNs) to overcome the restriction.

Modern technology tools are double edged weapons! Social media and the attendant technology is being used by security forces to track down the terrorists. This along with human intelligence (which is a predominant factor), is responsible for the conduct of incisive information based counter-terrorist operations that are being conducted by security forces with great success. Social media is also being used by terrorists for their personal vendettas with each other and the attendant friction tends to weaken their movement. Zakir Musa, a terrorist who followed the Islamic State ideology used social media to threaten beheading of the separatists if they did not desist from speaking of a secular freedom movement. Musa was later eliminated by the security forces but the fissures in the organisation were there for all to see. It is for this reason the some terrorist commanders in recent times have been passing diktats to their cadre to desist from the use of smart phones.

Curbing the social media is neither feasible nor productive as a counter measure. What is required is creation of awareness among the people to not get swayed by the content that is posted with an evil anti-India intent by the enemy. The space occupied by the perpetrators of propaganda has to be neutralised by creation of an equally potent nationalist space. The government will need to come up with the credible responses in this direction.