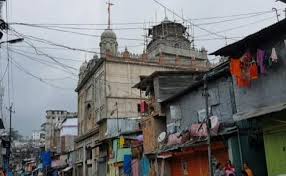 The Sikh community in Shillong, the capital city of Meghalaya, is in the eye of a storm. It is enveloped with a feeling of despair and insecurity due to re-ignition of tension with respect to its residential locality, Punjabi Lane, where it has been residing for the last almost 200 years. Ious in nature.(SMB) directing them to furnish documents to prove that they had settled in the area legally. A one month period, between 03, June to 03, July, has been given to them to furnish their reply. Prohibitory Orders under Section 144 CrPC were clamped in the area before serving of the notice. The SMB has taken this step in order to furnish a report for the High Level Committee (HCL) that has been constituted, under the Deputy Chief Minister, to resolve the issue arising from a demand for relocation of the Sikh population.

The sensitive matter has taken a serious turn due to a threat to the Sikh community by a banned terrorist organization called the Hynniewtrep National Liberation Council (HNLC). It has threatened dire consequences if they try to resist the government attempt to evict them. This is one of the rare occasions when a terrorist organisation is supporting an elected government to suppress innocent civilians. Also a committee under the chairmanship of a member of the government (Deputy Chief Minister), which is also party to the dispute, by itself, would be considered to be dubious.

The hapless Sikh community which is being so unfairly targeted constitutes of members of the Dalit Sikh community that was moved by the British from Punjab to Shillong to perform manual scavenging tasks sometime before 1857 and settled in this very location with permission of the Tribal chiefs, as was the custom in those times. Generations of this community have been keeping Shillong clean. Even today about 180 of them are employed by the very municipal board that is challenging their right to the land they have been living in for centuries. The Sikh sanitation workers are also looking after cleanliness of the Cantonment Boards, hospitals etc. They constitute a very important segment of the society in Shillong in terms of their productivity and civic contribution.

There are multiple reasons in the social, political and economic domain for this unfortunate turn of events. Prominent among these is the fact that this piece of land, which used to be in the far outskirts of the city, is now in its centre and is, as such, very valuable indeed. In the social domain come the identity issues that form the agenda of some fundamentalist sections of the indigenous Khasi people who look upon outsiders as threats to their culture and livelihood. Wherever there is a social and economic issue politics cannot be far behind, the local politicians have been garnering votes with promises of “eviction of the outsiders.”

Earlier too incidents have been reported of some anti-social indigenous elements, with covert support of the incumbent governments, attempting to pressurise the minority Hindu communities of Marwaris, Bengalis and Assamese into leaving the region. It is to the credit of these communities that they stood their ground and refused to be cowed down. Now, the Sikhs are stoically fighting for their right.

This is not the first time that the Sikhs have been thus targeted. Last year, in May, there was an altercation between them and some Khasi drivers. The small matter was blown so much out of proportion that Shillong stayed under curfew for days on end. Sikh religious bodies like the Shromani Gurudwara Prabandhak Committee (SGPC) and the Delhi Shromani Gurudwara Prabandhak Committee (DSGPC) had to intervene to ensure the security of the Sikhs. The objective was to create a perception that the Punjabi Lane has become a den for criminals and anti-social elements. The present build up is apt leveraging by the incumbent government of the created perception. By so doing it aims to win over the support of the dominant Khasi population.

The Sikhs are not without support. The Union government is seized with the matter; it has placed high priority on the safety and security of the community. The Union Ministry of Home Affairs (MHA) called for an urgent meeting to discuss the issue which was attended by the Chief Secretary of Meghalaya state who gave an assurance with respect to the safety and security of the residents of Punjabi Lane.  The SGPC/DSGPC has expressed solidarity with the Sikhs of Punjabi Lane; it sent a delegation there for fact finding and submitted a report to MHA. The Government of Punjab is also sending a delegation to assess the situation; the Chief Minister of Punjab has written to his counterpart in Meghalaya, Conrad Sangma, requesting him to ensure all necessary steps to provide protection to the Punjabis settled there.

While safety is an important aspect, ensuring justice to the people is equally important. The indigenous tribal’s of Meghalaya constitute of about 89 percent of the population of the state and are predominantly of the Christian faith. About 11 percent are Marwaris, Bengalis and Assamese of the Hindu religion and are mainly into business and junior level governance jobs.

The Punjab Sikhs are not even a small fraction of the population; despite this, they have made a massive contribution to society. Shillong would not be what it is today without their sincere efforts to keep it clean and functional for centuries on end. The state should look at its minority communities with pride and ensure their seamless integration in the society, most of all the Sikh community.

It is appreciated that the Conrad Sangma led Meghalaya Democratic Alliance (MDA) is a motley collection of political parties, including two MLAs from the BJP and controlling the same implies walking a tightrope. However, breaking social homogeneity for retention of power is not a good idea, ushering development and taking all communities along is.

There is an order by the Meghalaya High Court saying the state government should not disturb the Punjabi Lane Sikhs till such time that the civil courts decide upon the titles. Moreover, the land in question is a mere 1.75 acres in which about 2000-2500 Sikhs reside; the houses are no more than slums and living conditions are far below the satisfactory level.

If development and beautification of the city is the reason behind seeking the removal of the community then surely the same can be done by integrating in the process those very people who have been responsible for building the city to its present stature. Such a process is highly possible considering the small amount of land involved. In fact, modern technology and architecture can produce marvels. Pursuance of such an option would bring goodwill to the government which will translate into full support from the centre and more importantly the Sikh community across the world.

The attempt by the government to use dubious methods to gain control of the land is shameful. More shameful is the fact that successive governments have done nothing to integrate these Sikhs who have served the people and the land so faithfully and improve their lot on the social and economic front. This is an example of apartheid in its worst form.  It is hoped that good sense will prevail and the Sikhs of Punjabi Lane will continue to live on the land of their forefathers and serve the city that they have given their sweat and blood to for generations.

(Jaibans Singh is a reputed expert in Geo-politics, a columnist and author)