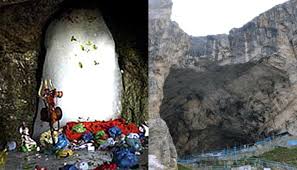 The pilgrimage to the holy cave of Amarnath in Kashmir is scheduled to commence on 28 June the auspicious day of Jyestha Purnima and culminate on 26 August, the auspicious day “Raksha Bandhan,” the Purnima (Full moon) day of the Shravan month.

The Shri Amarnath shrine is located at the head of the Sind Valley in Kashmir, flanked in the north by the great Himalayan range and in the south by the Sasakat mountain range. It is located beside a small tributary of the Sind River called Amaravati.

It is believed that the Lord Shiva narrated the Amar Katha to Goddess Parvati in this cave; it has been a place of pilgrimage since many centuries.

The Amarnath Yatra (pilgrimage) is an event that probably rivals the Kumbh Mela in terms of sanctity and religious significance. An annual feature, its uniqueness lies in the difficult terrain and the inclement weather that has to be overcome in order to reach the holy shrine.

The security force deployed in the state comprising of the Indian army, paramilitary troops and Jammu and Kashmir Police ably assist the administration and the locals towards ensuring smooth and safe conduct of the pilgrimage.

Apart from security the Army as also other security establishments provides immense humanitarian aid to the pilgrims. Throughout the Yatra, in addition to the arrangements made by the civil administration and other voluntary organisations, they provide food, refreshment and shelter to thousands of pilgrims. Helping the aged and the feeble negotiate the adverse terrain is yet another goodwill gesture extended.

Children who are separated from their parents in the large crowds find friendly guides who lead them back to their worried parents.

The army also sets up medical aid posts at various points along the route that are open to all civilians day and night. Veterinary camps are also organised to ensure the safety of the ponies, pack mules and other animals used in the Yatra. The army has exigency plans in place to meet any natural calamity. The mere presence of the Indian soldiers gives a sense of security to the pilgrims.

The prominent role played by the army in the conduct of the Yatra is by virtue of its size and wherewithal. This, by no means, belittles the excellent effort put in year after year by the paramilitary forces and the Jammu and Kashmir Police. The responsibility for the security of the pilgrims lies on the shoulders of these two organisations and they make elaborate arrangements to ensure the same.

This year has witnessed registration by a record number of pilgrims with the figure having already crossed the two lakh mark. Every effort has been made to ensure smooth conduct of the pilgrimage administratively as well as in terms of security. An elaborate three tier security system has been put in place with additional Paramilitary forces as required having been provided by the centre.

Governor NN Vohra, who is also the Chairman of the Shri Amarnath Shrine Board (SASB) has been working personally on the details for many months now. On 23 June, he visited the various camps including Sheshnag, Pahalgam and Chandanwari where he is inspected the arrangement on ground and also held meetings with the officers in charge of security as well as administration.

In a unique demonstration of synergy between the Security Forces the Corps Commander of the Srinagar based China Corps, Lt. Gen. AK Bhat and the Director General of Jammu and Kashmir Police, SP Vaid, together reviewed the security arrangement on ground. Also present were the officer who are to look after the arrangement on ground.

“The high level joint delegation also reconnoitered the routes and took stock of the security setup at key locations. The continued synergy among various stakeholders was emphasised by the senior commanders while interacting with the troops and officials on ground” an army spokesman said.

Defence Minister Nirmala Sitharaman accompanied by Army Chief, Gen. Bipin Rawat has visited Kashmir to review the security arrangements. She was briefed about the measures put in place at Baltal and also met the Governor.

The deep interest being taken at the highest level by the centre as well as the state administration indicates the significance being attached to the safe and proper conduct of the pilgrimage. The pilgrims, by remaining disciplined and by adhering to the security rules can make a big contribution in ensuring the pilgrimage become a memorable one for all. It should never be forgotten that the threat to the Yatra from terrorist violence is palpable and all have to join hands to negate the same.

With all arrangements in place it can be safely said that Kashmir is poised to receive its annual guests to its most revered shrine. It is time to extend best wishes to the organisers as well as those who are undertaking the holy pilgrimage.