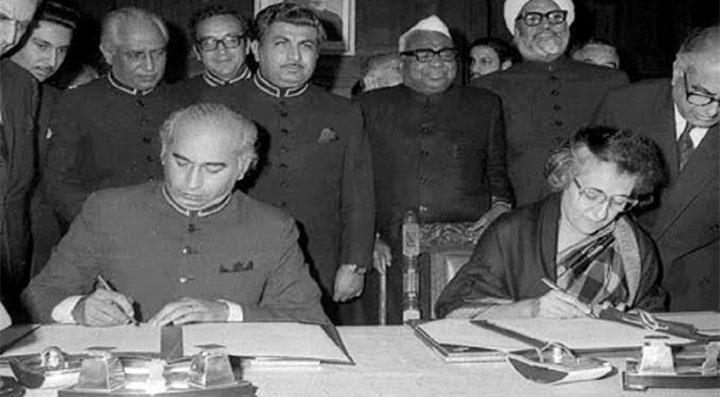 On 29 August, 1972, the final agreement between India and Pakistan based on the Shimla Summit between Indian Prime Minister Indira Gandhi and Pakistani President Zulfikar Ali Bhutto was signed by the two chief negotiators, Parmeshwar Narain Haksar of India and Aziz Ahmed of Pakistan.

Prime Minister Indira Gandhi held the Shimla Summit with President Zulfikar Ali Bhutto of Pakistan on 02 July 1972. The proceedings are recorded in history as the Shimla Agreement that laid down the process for return by India of all Pakistani POWs in her custody and also return to Pakistan 13000 kms of captured territory in the western theatre.

While the two leaders spelled out the overall agreement in the Summit, protracted negotiations over 19 sittings in nearly two months were held before the details were thrashed out.  It is said that Prime Minister Indira Gandhi intervened several times to keep the talks going and the final draft was approved by her cabinet. The Government of Bangladesh too expressed full satisfaction with the agreement and gave concurrence for the same. Thus came about the aforementioned agreement of 29 August, 1972.

Prime Minister Indira Gandhi kept paramount the interest of Bangladesh. She succumbed to the pressure of ensuring the release of Sheikh Mujibur Rehman as also the Bengalis stuck in Pakistan. By so doing, she erred in visualising the larger strategic picture that would have been of benefit to India.

Bangladesh dropped the demand to try for war crimes 195 Pakistani’s held in India  held in India and Pakistan in return agreed to drop charges on 203 Bengalis held for committing war crimes in erstwhile East Pakistan.

The Indo-Pakistan War, 1971 ended on 16 December, 1971. It was a victory of India over Pakistan that has no parallels in annals of military history. The entire Eastern Theatre of the Pakistan Army surrendered to Indian forces. It resulted in the seceding of East Pakistan to Indian Army and resultantly creation of a new nation – Bangladesh.

This was the largest surrender witnessed in the world after World War II. The Pakistani Prisoners of War (POWs) included 54154 soldiers of the Pakistan army, 833 Pakistan air men and 1381 seamen, 22000 Pakistan paramilitary personnel and 12000  civilian employees of the Government of Pakistan. The total number came 90368 POWs.

Pakistan lost 1, 48, 000 sq km of territory in its eastern theatre and 15000 sq km in the western theatre. 9000 Pakistani soldiers were  killed and 25000  were wounded. 200 tanks, 75 aircraft and 14 Naval crafts were destroyed. These included the pride of the Pakistan Navy, the Submarine Ghazi.

It is notable here that the United States had positioned their formidable 7th Fleet including the nuclear powered USS  Enterprise in the Indian Ocean to pressurise India. Russia and China too exerted pressure. Despite this, India gave to the people of East Pakistan their much needed freedom and thus did what was righteous and justified in the cause of humanity.

It goes without saying that the conclusive and historic victory was, in all measures, an ode to the bravery and professionalism of the Indian Armed Forces and especially the Indian Army. The war was meticulously planned under the aegis of the Chief of Army Staff General (later Field Marshal) SHFJ Manekshaw and executed flawlessly by the commanders on ground and the troops. The Indian Army strengthened its position as one among the best military forces in the world.

The Pakistani Army, while in control of East Pakistan had committed heinous crimes including rape, torture in custody, destruction of property and outright loot. The newly created Bangladesh wanted to try Pakistani soldiers for war crimes that, effectively, would have meant their arbitrary killing. India was sensitive to this danger and was quick to transport all the POWs out of Bangladesh and into her own territory. This noble act by Indians greatly displeased newly created Bangladesh. The Pakistani POWs were kept in camps across Indian and treated very well. All parameters of the Geneva Conventions on treatment of POWs were applied in letter and spirit.

In Pakistan, the war resulted in an end to military dictatorship and ushering of democracy, however tenuous. Zulfikar Ali Bhutto of the Pakistan People’s Party (PPP) replaced General Yahya Khan as President of the country. He remained President from 1971 to 9173 and later prime minister from 1973 to 1977 before being deposed through yet another military coup.

Bhutto threatened to put Mujibur Rehman on trial and execute him as a traitor; he agreed to forego this action and even release him on an assurance that the POWs and the captured  real estate would be returned to Pakistan. USA and China also put release of all Pakistani POWs as a caveat for the recognition of Bangladesh as a sovereign country.

India had considerable urgency to see Sheikh Mujibur Rehman freed from the custody of Pakistan and installed as Prime Minister of Bangladesh. The need to repatriate nearly 10 million refugees to their new country had a lot to do with this urgency. Then there was the problem for the war ravaged Indian economy to look after 90000 POWs, the cost was prohibitive.

It seems that a tacit agreement for the release of Pakistani POWs was reached sometime in the beginning of the year 1972 since Bhutto overruled the death sentence of Sheikh Mujibur Rehman on 8 January, 1972. The Sheikh took over as prime minister of Bangladesh on 10 January, 1972. The USA  declared Bangladesh a sovereign country on 4 April, 1972. Thus the ground was laid for the Shimla Agreement. However, Pakistan gave official recognition to Bangladesh on 22 February, 1974 and China on 31 August, 1974.

It becomes quite clear that Bhutto used Sheik Mujibur Rehman and the nearly two lakh Bengalis stuck in Pakistan as a tool to literally blackmail India and the world into getting back the POWs and also the territory lost to Indian on the western front.

If India had not succumbed to this pressure and instead kept her security interests paramount the negotiations could have led to a lasting solution to the Kashmir problem and other pinpricks of border and trade management with Pakistan. Sadly, India could not even negotiate the release of her own 54 POWs in Pakistani custody whose families continue to remain in despair.

There is an overwhelming perception that by agreeing to the terms set by Pakistan, India squandered a great opportunity for which Indian Army had sacrificed the blood of her brave soldiers. Most astoundingly, the Indian Armed Forces, that were the architects of the great victory were nowhere in the negotiation process. Many still wonder at the naivety with which the negotiations were carried out and the reason behind the same.

(Jaibans Singh  is a geo-strategic analyst, columnist and author)