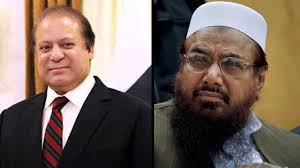 General elections are due in Pakistan in mid-2018. They will witness a fair amount of acrimony and belligerence with political parties leveraging all the clout and muscle that they can muster. Of particular value for all contesting parties will be the militant lobby that holds tremendous power and resources.

Pakistan Prime Minister Nawaz Sharif has scripted for his party, the Pakistan Muslim league (Nawaz) (PML-N), an elaborate game plan to neutralise opposition from the war lord, Hafiz Saeed, by playing out the Kashmir and India card.

Sharif is well aware that the erstwhile President and dictator of Pakistan and his bête noir, Pervez Musharraf, is poised to jump into the electoral fray and has the potential of becoming a viable competitor. Musharraf may not be politically as strong as the PMN (L) but his enmity with Nawaz Sharif since the days of the Kargil war and the subsequent coup is legendary. Obviously, Sharif would not like to see him progressing politically.

It is well known that Hafiz Saeed was created by the Pakistan Army as a tool to spread terrorism in India, especially in the state of Jammu and Kashmir. Quite naturally, he had the full support of Pervez Musharraf and as such enjoys a special relationship with him.

Musharraf is already in hyper mode and blaming the present Government of Pakistan of acting against Hafiz Saeed under pressure from India. While absolving Saeed of any involvement in terrorist activities, Musharraf insists that the former is only running a few peoples welfare oriented NGOs like Jamaat-ud-Dawa (JuD) and Falah-e-Insaniat Foundation (FIF). “They [JuD/FIF] have been engaging the religious youth in relief and welfare activities and if we push them against wall and call them terrorists, the religious youth could incline to Taliban and terrorists,” is the tongue in cheek statement made by Musharraf on the subject.

Nawaz Sharif looks towards Saeed as a political asset of his most dangerous rival. The fact that the JuD has declared its intention of contesting the parliamentary elections is another cause of worry for Sharif.

Nawaz Sharif has, therefore, moved with great alacrity against his political foes. His game plan is to use the pressure that has been generated by the US with the declaration that Pakistanis could be banned from entering the country as tool to strike at the election prospects of Pervez Musharraf and Hafiz Saeed.

On January 31 the provincial government of Punjab placed Hafiz Saeed and four other leaders of his organisation under house arrest on the basis of a letter issued by the interior ministry. The Pakistani Interior Minister, Chaudhry Nisar Ali Khan, solicitously stated that the government was taking steps to fulfil its international obligations regarding JuD. A big show was made of fast tracking the investigation into the 26/11 terrorist attack at Mumbai which was the handiwork of Saeed’s original terror outfit, the Lashkar-e Toiba (LeT).

The Pakistan Ministry of Interior took great pains to elaborate that JuD and FIF are engaged in certain activities which could be prejudicial to peace and security and are in violation of Pakistan’s obligations to the UN Security Council Resolution 1267.

Two days after placing him under house arrest, Pakistan put the name of Saeed and 37 of his associates on the Exit Control List (ECL). The matter further escalated in February when the Punjab provincial government listed Saeed under the fourth schedule of Pakistan’s Anti-terrorism Act (ATA). On February 22, Pakistan cancelled licenses of 44 weapons issued to Saeed and other members of his organisations, citing security reasons.

The cancellation of arms licenses by itself seems to be laughable considering the volume of weapons and firepower that Saeed has at his disposal, but its political value is significant since it provides a conduit to further curtail activities of the organisation.

This foregoing is a classic example of killing two birds with one stone and a testimony of Sharif’s political astuteness.

It needs to be noted that on four earlier occasions Hafiz Saeed has been put under house arrest only to be released in a short period of time. This time too, he held a press conference in his house immediately after the arrest and roundly gave out pressure from India via Washington as the reason for his arrest. By posturing against India and ignoring the political manoeuvring being done by Nawaz Sharif, Saeed has indicated that he was ready to play the game and would not be backing off in a hurry.

Now, 22 days after the house arrest the JuD chief and his four aides have challenged their house arrests, being added to the fourth schedule of ATA and putting the names of 37 of its leaders on the ECL in the Lahore High Court (LHC).

A division bench of LHC did not take much time in issuing a notice to the Punjab Home Department directing it to submit its response by March 7.

There is now a lot at stake for Nawaz Sharif! If Saeed and his associates are set free by the court, which is a distinct possibility, then there is every chance of the JuD registering itself as a political party. Joined with Pervez Musharraf it would then become a more dangerous option that the PPP or Imran Khans Tehreek-e-Insaaf party.

For India, this political churning within Pakistan has come as a blessing in disguise. Here the element of “an enemy’s enemy is your friend” needs to be leveraged with Hafiz being the enemy and Sharif becoming the friend.

It would be best for India to give Sharif credit for attempting to cleanse the system and while doing so expose the terrorist credentials of Saeed to the global community. If the matter is played right the terrorist infrastructure in Pakistan will receive a major blow while the chances of Sharif getting back in power will increase. This would entail a win-win situation for India.