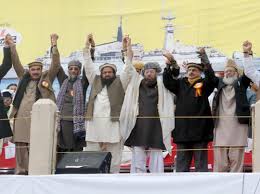 On December, 04, 2013, Nawaz Sharif, Prime Minister of Pakistan, while addressing the Budget session of the sham of a government installed in Pakistan Occupied Kashmir (POK) stated that “Kashmir is a flashpoint and can trigger a fourth war” between India and Pakistan. The statement was, of course, hurriedly retracted by the Prime Minister’s office in the typical two faced manner that Pakistan excels in, but not before the Indian Prime Minister had, in a rare expression of strength, said that “there was no scope of Pakistan winning a war against India in his lifetime.” The statement by the Indian Prime Minister was delivered while interacting with journalists during an “At Home” in the residence of the Indian Naval Chief. The message was clear and strong enough to elicit the immediate reconciliatory statement from Pakistan.

The statement by the Pakistan Prime Minister, however, has to be seen against the backdrop of the extreme anti-India sentiment that is being built by propagandist forces in Pakistan of late. On December, 01, only a few days before the statement was made the Difa-e-Pakistan Council (DPC) held a rally in Lahore to protest against drone attacks. The DPC is an umbrella coalition of more than 40 political and religious organisations based in Pakistan. The binding factor of these organisations is fundamentalist ideologies and anti India, anti- US and anti-Israel postures. Notable speakers in the rally were the chairman of the organisation Sami-ul-Haq; Hafiz Saeed, an internationally wanted terrorist; Hamid Gul, the infamous ex-ISI chief who is now the coordinator of all fundamentalist activities in Pakistan involving both the Tehrik-e-Taliban Pakistan (TTP) and the Jihadi organisations directed against India and Kashmir; Sardar Attique Ahmed Khan, an ex-Prime Minister of one of the puppet regimes installed in POK; he is roped in for such congregations to give legitimacy to the propagandist statements; there were many more of the same ilk.

It so turned out in the rally that drone attacks were put on the back burner and anti-India sentiment took centre stage. The main issues that were raked up by speaker after speaker were the country’s alleged role in creating a rift between Shias and Sunnis in Pakistan as also between the people and the Pakistani army. Hafiz Saeed categorically blamed India, the US and Israel for sectarian clashes in Balochistan. Hamid Gul took off from where Hafiz Saeed left and went to the extent of declaring that Pakistan was already in a state of war with India and the US and that the prime minister should come out with concern for the situation. A surprising speaker in the forum was Raja Zafar-ul-Haq, Chairman of the Pakistan Muslim League-Nawaz (PML-N) and a member of the Senate. He categorically blamed India for “destruction of Karachi and Balochistan” and went to the extent of stating that India wished to occupy Pakistan. On Kashmir he expressed a feeling that the governments of the past had failed to make the international community fully aware of the facts of the situation.

More than anything else it was the wall that India proposes to build along its borders with Pakistan that came up for much criticism and elicited a vitriolic smear campaign. Hafiz Saeed demonstrated his traditional bravado by declaring that Pakistan would pull down the wall with bare hands if India displayed the “temerity” to build the same. Sardar Attique Ahmed Kahn put in his penny’s worth by expressing concern about the construction of the wall and calling upon the Pakistan government to stop its construction. In fact the wall has become a big topic of discussion in Pakistan media and a propaganda campaign has been put in place to build public sentiment against it. A prominent Urdu writer of Pakistan, Mir Afsar Aman, has referred to it as a “Brahmin wall” conceived with the intention of enslaving Kashmiri’s. The fact that the wall is proposed to come up in the Jammu region where no Kashmiri would be affected is being conveniently sidelined. Even the terrorist organisation Jaish-e-Muhammad has commented on the construction of the wall; it says that the idea is by itself “laughable” and the Mujaheedeen know how to cross such walls.

The English press in Pakistan carries muted versions of such stories since it has to cater to the sensitivities of the international community; its anti-India rhetoric is more subdued and nuanced. It is the Urdu press and some news channels in Pakistan that spread such rabid, propagandist information. The aforementioned statements and information have been gleaned out from the Urdu press like Jasarat, Ibrat, Roznama Duniya, Urdupoint, Khabrain, Ausaf, Jinnah, Ummat, Nawa-i-Waqt, Daily Pak etc.

While there is this incessant talk of dialogue, confidence building, peace etc. Pakistan remains committed to its agenda of keeping the anti-India sentiment alive among its gullible public. Organisations like the DPC are provided with unlimited finds and resources to hold malevolent congregations like the one being discussed where venom is spouted at will by wanted criminals and then carried by the media over days together to create a wave of hatred against India through misinformation. The fact that a very senior representative of the PML-N was also present in the congregation and he went to the extent of making abrasive statements leaves no doubt about complicity of the Government in the entire diabolic drama.

This could have been the inspiration for Nawaz Sharif to come up with his, by now, much maligned war mongering a few days later. After all speaker after speaker came up with demands for Sharif to adopt a more stringent posture against India and the US. All of this could well be part of an overall strategy to corner India through public sentiment, a sinister double game being played out by the Nawaz Sharif led government. While being open to talks India should remain vigilant about the very obvious and structured malevolence emanating from Pakistan.